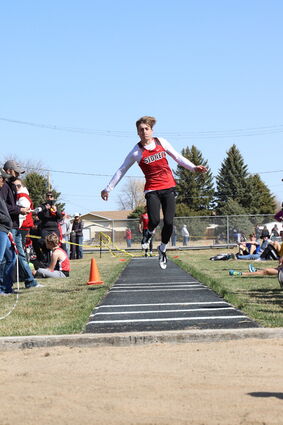 After a blast of winter weather disrupted the Spring Sports schedule, the Red Raider Track and Field teams were back in limited action at the Don Bader Invite in Lexington and the Pine Bluffs Invite in Wyoming on Friday, April 23.

Although no team scores were computed at the Don Bader Invite, several Sidney athletes excelled in the day’s competitions.

Junior Sawyer Dickman placed third in the High Jump clearing 6’ 1” to round out the major scoring for Sidney.

The 4x100 and 4x400 Meter Relay teams earned second place and the 4x800 team earned first place. Senior Karly Sylvester won the Shot Put and Discus, the latter with a personal best throw of 132’ 11”, while freshman Karsyn Leeleing won the High Jump clearing 5’5”, another personal best. Sophomore Gabrielle Fortner placed third in the Long Jump to round out the major scoring for the Lady Raiders.

Over in Pine Bluffs, the Sidney boy’s team finished fifth with 43 points and the girl’s squad finished ninth with a score of 32. Highlights for the boys included junior Jackson Russell winning the 400 Meters with a personal best time of 54.28, sophomore Micah Schneider placing fifth in the High Jump with a personal best leap of 5’5”, junior Austin Wolf placed fourth in the Long Jump and sixth in the Triple Jump, while sophomore Austin Roelle placed fifth in the Triple Jump.

The Raiders were back in action on Monday April 26 at the Best in the West Classic in Scottsbluff.