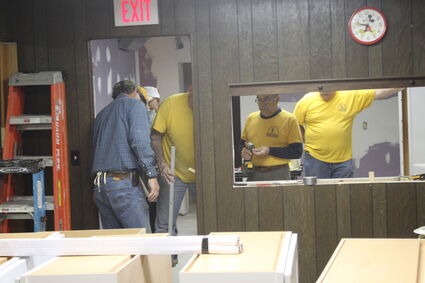 Houses of worship do not always come with an abundance of finances. Some are as the poet describes, the church in the wildwood.

As the poet, songwriter describes, this church is a small fellowship in the vale. It is a church likely small enough building it took a lot of volunteers and time. Maintaining it took just as long.

The Panhandle has many churches where the Word of God is shared with the faithful few, and when an emergency occurs, they have to rely on their brothers in faith. That is the story of New Hope Fellowship in Lodgepole.

“Four years ago, we had a pipe break in the kitchen,” said R.J. Savely, Jr. of New Hope Fellowship.

He said the water got to five inches deep in the basement kitchen. The church is designed for worship on the main floor and fellowship and classroom space in the basement, so what affects one area impacts the other. In the process of investigating how much work is needed, the church found itself beyond its means. A licensed electrician, a carpenter, and obviously a plumber were necessary skills.

The kitchen was gutted, which lead to finding flooring issues that needed fixed, and a stove and oven using the same circuit.

“We had a volunteer come in a replace the plumbing, one end to the other,” Savely said.

The team arrived on April 18, starting their week of work the following Monday morning. The team included two licensed master electricians and 15 additional volunteers. The team completely redid the electrical system, hung drywall, installed new cabinets and painted the kitchen area. The team came to Lodgepole committed to work, rising for breakfast at 7 a.m., starting work at 8 a.m. And staying on the job, with the exception of meals and snacks, until that evening.

The project was supported by other volunteers, and donors. The Well Church in Sidney donated snacks; Wild Flower Bakery, Steer Inn and the Panther Den and anonymous donors supported the team throughout the week with meals and various other support. He said one day someone paid for the teams sandwiches. That person happened to be in the store as they were being made and offered to pay for them.

“This whole week has been one blessing after another,” Savely said. 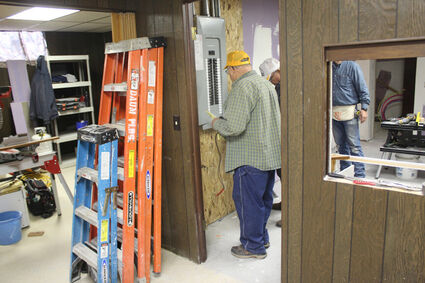 The team of 17 came from four different states, he said.

“Some are retired, some took vacation time.”

The Kansas-Nebraska Convention Southern Disaster Relief is not an organization in a traditional sense of the word. It is a network of people and churches willing to volunteer time and resources for those in need.

The project became more complicated than first expected. The countertop for the sink absorbed moisture from the floor and warped. The project still needs countertops installed, flooring finished, suspension ceiling and sinks completed, dishwasher and stove installed and finish painting. A second team is tentatively planned for the last week of May.