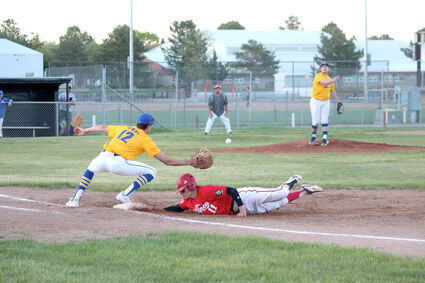 Sidney’s American Legion Post 17 Senior Baseball team continued their slow start to the season, but were able to finally break through with a win against the Bridgeport Bombers on Wednesday before losing to the Bombers in tournament play on Sunday.

On Tuesday May 25, the Seniors hosted the bombers at Legion Field, and this game slowly slipped away as Gering built up runs as the innings progressed while Sidney struggled to find any offense.

Gering broke through in the second inning, helped by the first of six Sidney errors in the game, and put up a run on an error at third base. Sidney went down in order in the second and third innings, and Gering put up two more runs in the top of the fourth inning on a double by Green to increase the Gering lead to 3-to-0. Sidney managed to get two runners aboard in the bottom of the frame, but were unable to score.

Two more Sidney errors were at the center of a Gering three run inning in the fifth, as Gering built their lead to 6-to-0 without getting a hit in the frame.

Green kept firing in his pitches and Sidney again went down in the fifth, stranding a runner on a single but remaining scoreless. Two walks, a hit batter and an error brought in four more Gering runs in the sixth inning, and Sidney finally managed a run in the bottom of the sixth when Jakob Meyer scored on a ground out to break up the shut out. But that was all Sidney’s offense could muster, and Gering took the victory by a final score of 10-to-1.

Schneider went 5 innings in the loss and gave up six runs, but only one was earned. He struck out 10 batters while scattering four hits and a walk. Ty Stettner had the lone RBI for the Seniors in the loss.

The Seniors next traveled to Bridgeport on Wednesday May 26, but this time it was Bridgeport who let the game slip away due to errors, as the Seniors topped the Bombers with a seventh run inning to take a 6-to-5 victory and get in the winning column for the first time.

Blaine Russell led off with a single for Sidney, but Bridgeport starter J. Walleson bore down and retired the side after the initial hit and kept Sidney off the scoreboard. Sidney starter Austin Lulf gave up a walk and a single that both came in to score, giving the Bombers a quick 2-to-0 lead. In the top of the second inning, Jakob Meyer lifted a double to center field for Sidney, followed by two walks, a hit batsman and an error to get Sidney two runs and tie the game at 2-to-2.

A single, walk and an error plated another Bridgeport run in their half of the second inning, giving the Bombers a one run lead. An error with runners on base in right field by Bridgeport allowed Sidney to again tie the game at three in the top of the third inning. Sidney’s Austin Wolfe then came in to pitch, and shut down Bridgeport in the bottom of the third. Sidney then took advantage of another Bridgeport error to manufacture two more runs, and took a 5-to-3 lead in the fourth inning.

Wolfe continued to cruise on the mound, setting the Bombers down in order in the fourth, but then faltered in the fifth, giving up two hits and three walks to allow Bridgeport to tie the game at 5-to-5. In the seventh inning, Reid Fiscus was able to single then steal second to get into scoring position, then scored on a sharply hit single by Sam Hashman to give Sidney a 6-to-5 lead.

Hashman then took over the pitching duties in the bottom of the seventh, and set the Bombers down in order to pick up the 6-to-5 victory for Sidney. Hashman belted three singles and had the winning RBI to lead the Sidney offense, while Wolfe went 3.2 innings on the mound, scattering three hits and two runs in the Sidney win.

On Sunday May 30, Sidney faced Bridgeport again in tournament play, but this time the Bombers scored early and often, building a 6-to-2 lead at the end of three innings. Wolfe again was on the mound for Sidney, but was unable to effectively contain the Bomber’s offense.

Sidney scratched out a few runs to stay in the game, and tried to rally from an 8-to-2 deficit in the bottom of the sixth inning.

An RBI each by Wolfe and Micah Schneider was all Sidney could muster, however, and the Seniors fell to Bridgeport by a final score of 8-to-4. Paul Houser and Micah Schneider each had two hits an an RBI to lead Sidney’s offense. Wolfe pitched for 3.1 innings and gave up seven runs on seven hits, with one strikeout in the loss.

The Seniors were scheduled to host Gordon Tuesday evening at Legion Field.