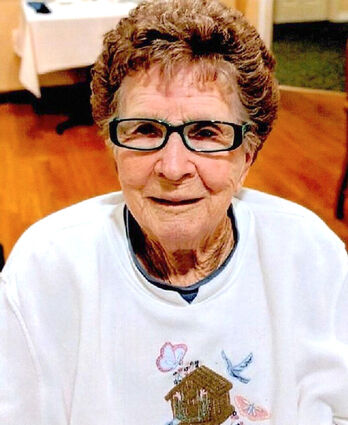 Viola F. Jelinek, 96, died at the Venice Florida Regional Hospital on Tuesday, December 15, 2020. Memorial services will be held at 10:00 a.m. on Saturday, June 19, 2021 at the Cantrell Funeral Home in Kimball with Pastor Roger Gillming officiating. Inurnment will be held in the Greenwood Cemetery in Sidney. Friends may visit http://www.cantrellfh.com to view Viola’s Tribute Wall and leave condolences and stories for the family. The services for Viola have been entrusted to the Cantrell Funeral Home.

Viola Frances Jelinek was born in Mason City, Nebraska on December 8, 1924, the daughter of Samuel and Clara Hammond. Her family moved to Bushnell in 1928. Viola was married to Maurice “Stub” Steele in 1940 and they had three daughters, Janet and the twins Dian and Joan. Viola later married Kenneth Jelinek on April 17, 1958 in Elko Nevada. They moved to Story, Wyoming and started a construction business. They retired in 1984 and moved to Sidney, Nebraska. Viola moved back to Kimball after Kenny’s death, where she lived until she moved to Florida to be with her daughter Janet. She was a member of the Trinity United Methodist Church and the Eagle’s Lady’s Auxillary. Viola loved gardening and was known for her beautiful roses, her favorite flower was Amaryllis. She also made the best angel food cake.