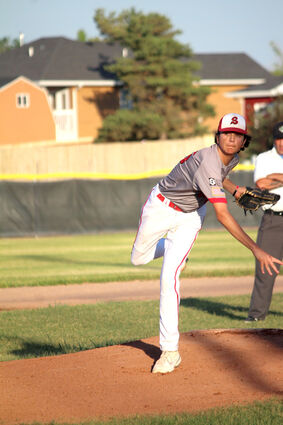 Sidney’s American Legion Post 17 Senior Baseball team traveled up to Rapid City for a weekend tournament, and struggled against the competition, only managing a tie against Cheyenne for the tournament.

Prior the weekend tournament, however, Sidney hosted the Alliance FBNO Spartans at Legion Field on Wednesday on Senior Night, and were victimized by a six-run second inning by the visitors and were unable to recover, losing the shortened game by a final score of 15-to-5.

Sidney’s Ty Stettner started the game on the mound and gave up six runs on three hits over one and two-thirds innings, while striking out two.

Sidney managed to narrow the lead with a three-run second inning, but Alliance responded with four-run top of the third, and the rout was on. Micah Schneider, Landon Riddle and Jakob Meyer all had multiple hits for Sidney in the loss.

Sidney then traveled for tournament action up to Rapid City on Thursday, as they first played the Cheyenne team, and were slated as the visitors in the game. Sidney scored two runs to open the contest, the first coming on an RBI single by Sam Hashman, then the second run came in when Ben Hashman was able to steal home on a passed ball.

Tony Young started on the mound for Sidney, and put Cheyenne away in order to end the first inning. Sidney next added a run in the top of the fourth inning when Young singled home Gunnar Dorcey to give Sidney a 3-to-0 lead.

Cheyenne managed to put two runners on base on walks, but Schneider recovered and ended the threat with a strikeout then a groundout, ending the game in a 3-to-3 tie. Sam Hashman had two hits, a single and a double, and Austin Lulf also had two hits to lead the offense. Young gave up three hits and three earned runs in 4.1 innings of work, striking out two and walking one.

Sidney next played the Renner Royals team in the evening on Thursday, and the Renner team’s high-powered offense quickly jumped on Sidney starter Micah Schneider, putting up two runs in the first and then seven runs in the second. Jakob Meyer relieved Schneider, but had no better luck as the Renner team scored in every frame, opening a 12-to-0 lead, and then ending the shortened game with a thirteen-run fourth inning to take the victory 25-to-5. Neither team committed an error in the contest.

Sidney then faced Casper on Friday morning, and it was no contest for the Casper team as they put Sidney away 25-to-4. Sidney then tried to manage a win in their last game of the tournament against the Rapid City Post 22 Bulletts Saturday night.

Rapid City finally broke open the scoreless contest in the top of the third inning when Sidney starter Ty Stettner gave up a walk, a single and hit a batter allowing Rapid City to plate two runs. Sidney responded in the bottom of the third when Schneider singled and drove home Blaine Russell to get Sidney on the board. But Rapid City responded in the fourth inning, putting up three more runs to extend their lead to 5-to-1. After the Bulletts put up two more runs in the fifth inning, Sidney responded with two of their own to narrow the lead to 7-to-3.

The Bulletts put up three more runs over the next two innings to lead 10-to-3 going into Sidney’s last chance in the bottom of the seventh, but the Post 17 squad would not go quietly.

Jakob Meyer started the Sidney surge with a double to lead off the inning, and was followed by five singles, a walk and a hit batter to bring home four runs for Sidney. But the inning ended when Jonathan Meza was picked off at second base, and the Sidney rally fell short. Sidney dropped the game by a final score of 10-to-7, but never gave up and showed a lot of fight. Austin Lulf had three hits and an RBI and Austin Wolfe had two hits and two RBI in the loss.

The Seniors next face Fort Morgan on Wednesday before traveling to Alliance for tournament action later in the week.