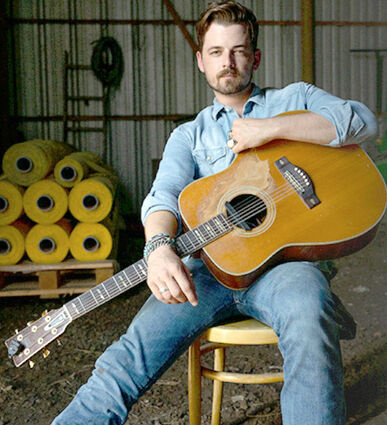 The Cheyenne County Fair Board recently announced that Chase Bryant will be providing the entertainment for the 2021 county fair.

The concert is scheduled for 7 p.m. Friday, July 30. His music will include Top 10 Country Music song “Take It on Back.”

The Cheyenne County Fair Board favored Bryant because of the timing. He is releasing his new album shortly before the fair. The board chose Bryant from three favored performers.

An opening act is planned but the performer has not been named yet.

Tickets can be purchased online at https://cheyennecountyfairandrodeo.ticketleap.com/chase-bryant/dates/Jul-30-2021_at_0700PM. Tickets are $20 for adults plus a $2 fee, children ages 7 to 18 are $10 and a $1.50 processing fee and children under 7 are free.

Calling his latest album a “shot at redemption,” Bryant says “This is the second chance I never thought I’d have.”

“In a way, I feel like I’ve been working on this record my whole life. I had to go back to Texas to make it, but it was inside me all along,” Bryant says on his website.

His new album, ‘Upbringing,’ recorded in the aftermath of a season of darkness and despair, is a searing, honest portrait of struggle and resilience from a songwriter finally learning to love and trust himself, flaws and all.

Born and raised in rural Orange Grove, Bryant grew up dreaming of a life in music, inspired in part by his grandfather, who performed with Roy Orbison and Waylon Jennings, and his uncles, who co-founded the chart-topping band Ricochet. Those dreams came true faster than Bryant could have anticipated, though, and fame and success arrived with a hefty price. By 21, he already had two Top 10 singles and tours with the likes of Brantley Gilbert and Tim McGraw under his belt, but it all felt inauthentic, like he was playing a character with expectations he could never live up to. The harder he pushed back, the worse things got, and soon, Bryant barely recognized the man he saw in the mirror.

“I was a very confused individual,” he confesses. “I was cocky. I was arrogant, I was sick. And that led me down a pretty dark hole.”

Rock bottom came in a gas station parking lot, when Bryant’s anxiety and depression led him to put a loaded .357 revolver to his head.

“I was sitting there begging for some kind of intervention,” he recalls. “I said, ‘God, if you’re real, I need you to help me, to show me what I’m supposed to do, because otherwise I’m done.’ I felt like I just couldn’t take it anymore.”

When no sign arrived from above, Bryant screamed that he was sorry and pulled the trigger. He opened his eyes a few moments later, certain he was dead and waking up on some alternate plane of existence only to realize that something miraculous had happened, that he was somehow still alive. Opening the cylinder on the revolver, he found only five bullets instead of the six he was sure he’d loaded. The empty chamber had spared his life.

“For the first time, I felt like somebody had heard me crying out for help and stepped in,” says Bryant. “It made me realize that my life wasn’t supposed to end that day, that I still had a purpose to live for.”

Bryant spent the next several years facing his demons, learning to be comfortable in his own skin, to make peace with being alone, to be okay with not being okay all the time. In search of perspective, he eventually left Nashville altogether, moving back to Texas and purchasing an old ranch house that had been in his family since the 1960s.

With the floodgates open, Bryant entered one of the most prolific creative periods of his life. This time he was writing for himself and anyone else who needed to hear what he had to say.

“I wanted to be that empty chamber for somebody else,” Bryant explains. “I wanted to help people realize that they’re not alone in this fight, that somebody’s out there listening and has their back.”

The resulting songs were grittier and more honest than anything Bryant had written in the past, drawing on decades of southern rock and classic country with lyrics that favored simplicity and directness over polish and flash. Deep down, Bryant knew the music called for a different approach in the studio, too, and when his old pal Jon Randall signed on to produce, the two decided to embrace album’s Texas roots and record at Austin’s famed Arlyn Studios. Backed by drummer J.J. Johnson (Gary Clark, Jr., Tedeschi Trucks Band) and guitarist Charlie Sexton (Bob Dylan, Lucinda Williams), Bryant performed much of the material live on the floor, capturing the unmistakable energy and catharsis of the moment as he poured his heart and soul out into the microphone.

“I know there’s going to be people who want to ask how I got from my radio hits to the music I’m making now,” says Bryant, “but the real question is how I ever got to that place to begin with. These songs are the real me, and at the end of the day, I don’t care if they’re big and I don’t care if they’re hits because I can finally look myself in the mirror now and see the person I’ve always wanted to be.”