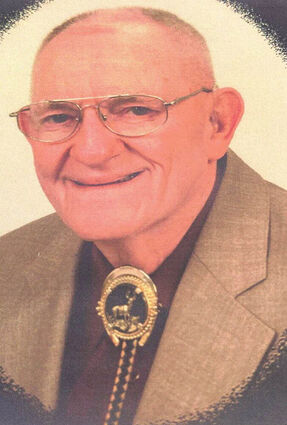 Jerry was born December 6, 1929, to Curtis and Hazel (Ruff) Hall of Lima, Ohio. He loved his country and considered it an honor to serve in the military. The United States Air Force was called the Army Air Corps when he joined in 1946.

He married the love of his life, Katherine Jacomet, on March 29th, 1952 in their hometown of Lima, Ohio. Jerry was on active duty when they married, together they lived on several Air Force bases. Jerry was separated from his family while stationed in Morocco on the African continent in 1958.

Daughter Theresa was born while Jerry was in Africa and was nine months old before Jerry met her. Jerry retired from the Air Force with 20 plus years of service in 1967. For most of their marriage they lived in Colorado Springs, Colorado, before moving to Sidney, Nebraska in March 2018.

Jerry was dedicated to his country and loved being an American. He taught his children it is an honor to live in America. His faith in God gave his life depth and meaning. His generous soul and kind heart only became bigger after becoming a Christian in 1971. Jerry had a servant’s heart and would always jump in to help wherever God led him.

Family was important to him. He loved being with family. If there was a crisis in the family, he was there to help. Jerry loved to laugh. His jokes and teasing of grandkids brought him great joy. He practiced his jokes on his own children then perfected his skills with his grandchildren. He loved corny jokes and puns and always had new jokes to tell.

He was preceded in death by his wife, Katherine, his father, Curtis Hall, his mother, Hazel Emlinger, stepfather, Russ Emlinger and brother, Bob Hall.