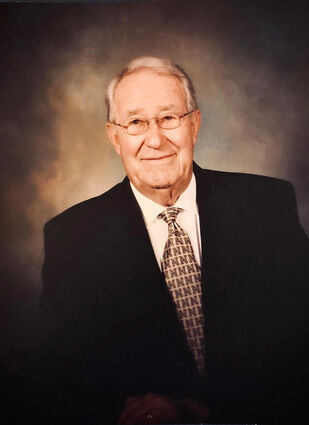 Thomas “Tom” Lorton Kokjer, age 93, of Sidney, NE passed away Sunday, June 13, 2021 in Sidney. A Memorial Graveside service will be held at 10:00 A.M. Saturday, July 24, 2021 at Greenwood Cemetery with inurnment to follow. Cremation has been held. A Celebration of Life for family and friends will immediately follow at Fanny’s Farmhouse, 1 1/2 miles east of Gurley, Nebraska on Road 46. A memorial is being established and can be sent in care of the family for a later designation.

Friends may stop at the Gehrig-Stitt Chapel on Friday, July 23, 2021 from 1-6:00 P.M. to sign Tom’s register book and leave condolences for the family. Family will not be present.

You may view Tom’s Book of Memories, leave condolences, photos and stories at http://www.gehrigstittchapel.com. Gehrig-Stitt Chapel & Cremation Service, LLC is in charge of Tom’s care and funeral arrangements.

Tom was born on June 23, 1927 in Helena, MT to Thomas E. & Isabel Lorton (Hawkins) Kokjer. He was the second of three children. He resided in Alliance, NE until 1932, when his father purchased the Chevrolet dealership in Sidney. Tom graduated from Sidney High School. He served in the U.S. Navy during WWII, assigned to the South Pacific.

Following his military service, he earned a degree in Business Administration from the University of Nebraska in Lincoln where he was a member of the Delta Upsilon Fraternity.

Upon graduation, Tom returned home to join his father in business at the Kokjer Motor Company. Following his father’s death, he continued as a managing partner of the Chevrolet dealership until 1972. During his years in the automobile business, he served as President of The Nebraska New Car Dealers Association. Eventually selling the dealership, Tom spent the remainder of his professional career as a board member and officer at Sidney Federal Savings and Loan, retiring in 1996. He continued to stay involved with Sidney Federal, serving on the board for several years.

Tom enjoyed the Sidney community, and was involved in numerous community boards and organizations over the years, including the Sidney Hospital Board, City Council, and Sidney Economic Development. He always had time for family, friends, golfing, hunting, and Nebraska Football.