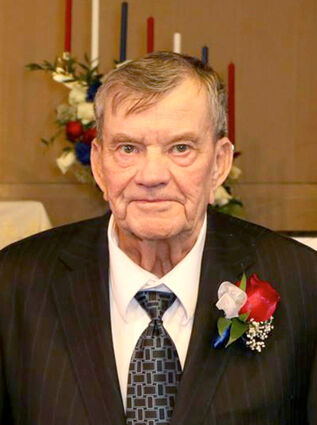 Sam Hilliard, 83 of rural Ogallala peacefully entered the kingdom of heaven on Monday August 2, 2021 at the University of Colorado Medical Center in Aurora Colorado.

Sam always said “I was born on this farm and I’m going to die on this farm”, when anyone talked about him moving to town. He was fiercely independent and exemplified a quiet strength. Unmoved by guilt or glamour, and he was polite and committed to his faith. He went out of his way to be considerate to other people and had an ability to make everyone feel like they were his favorite person in the world. With a great sense of humor and work ethic, Sam’s unconditional love had a lasting effect on his children, grandchildren, friends, and acquaintances.

He was born November 6, 1937, to Samuel and Ona (Severns) Hilliard. Sam, was the youngest of 4 children, and grew up more like an only child. His sisters were much older than he and his brother died at an early age. Sam told stories about his parents on the farm raising grain, livestock, and chickens. He remembered that his father told him that pigs were called mortgage busters. His mother sold eggs and milk in town. He loved fresh cream from the cows. His job was cleaning the cream separator. Sam said that nothing was better than a freshly butchered and fried chicken when he was a boy and reminisced that his most memorable gift was the 22 rifle that his dad gave to him when he was 8 or 9 years old.

Sam graduated from Ogallala High School and attended Wentworth Military Academy. He married Sharon Mayden on June 7, 1959. They had 3 children, Samuel Kevin, Kelly, and Kristi. Sam loved his kids and bragged on them to anyone who would listen about what they were doing and what they had accomplished in their lives. He farmed with his dad until retirement and could talk farming for hours. He always kept a second job in town and loved working at the Super 8 where he talked daily about the ladies he worked with. He had a pet name for many that he loved and a fun and silly name for everything he enjoyed. He cherished his days on the boat fishing at Lake McConaughy with his son-in-law Mike and had hoped for the day that he could “get out on that boat again.”

Sam will always be remembered for being funny and entertaining, teasing and testing Sharon, having all his family together on Christmas Eve, watching Hee Haw and Rawhide, loving Cornhusker football and betting “lunch” on the games, drinking Pepsi-pepper sodas, making everyone feel like they were his favorite, not having an enemy in the world and being “the nicest person I ever met”. Anyone who ever called Sam on the phone will know that if they called heaven today and Sam were in charge, they would hear that familiar greeting: “Sam’s Place!”

Sam was preceded in death by His parents, Samuel A Sr. and Ona Vesta (Severns) Hilliard, a grandson Christopher Hilliard, Sisters Nadine Wilson and Virginia Patterson, and his brother Jack Hilliard.

Funeral services will be held on, Monday August 9th 2021 at 10:00 AM, at St. Paul’s Lutheran Church of Ogallala Nebraska, with Pastor Albert Bader officiating. Internment will take place in the Ogallala Cemetery following the service, at 1:00 PM. Memorials are suggested to the St. Paul’s Lutheran School.