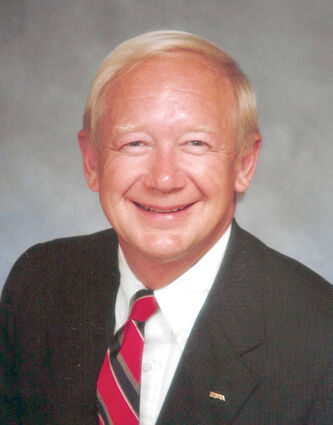 Thomas Harold Olson, Sr. of Lisco, Nebr. died peacefully on July 26, 2021. Born on August 31, 1935, Tom was the youngest of four children to Harold and Helen Olson. He grew up in the village of Lisco where he received his formal elementary education and the less formal education that a young boy finds when growing up in a rural town. His connection to the Sandhills would eventually lead Tom and his wife, Cynthia, back to Lisco where they would raise their three children, Kerstin, Lynne, and Tom Jr.

Tom graduated from Garden County High School with the class of 1953 and from the University of Nebraska in 1957. Upon college graduation, he received his commission as a second lieutenant in the Air Force. After his active duty, he continued serving as Nebraska’s Admissions Liaison Officer Coordinator overseeing officers who counseled young people interested in the Air Force Academy and ROTC programs. Tom ended his Air Force service as a full-bird colonel in the U.S. Air Force Retired Reserve.

Tom always considered himself a small-town man and a true son of Lisco, so he embraced an opportunity to work alongside his father at the Lisco State Bank. Thus began a prolific banking career that found Tom as the owner of banks in over 20 communities across Nebraska, Colorado, and Wyoming. He served diligently as President of the Independent Bankers Association of America and the Nebraska Bankers Association. He also served as a director with Farmer Mac and the Federal Reserve Bank of Kansas City, Omaha Branch. Tom was most proud of his service as a board member and treasurer of 50+ years for Rush Creek Land & Livestock and as a board member of the Federal Home Loan Bank of Topeka for eight years.

Despite the myriad of impressive accolades, Tom’s reputation was most notably marked by a special kind of humility & hard work only found in those whose hearts are tied to the Sandhills. Those who knew Tom well might argue that his “career” began when he was a ranch hand at just seven years old and never truly ended. He insisted on attending board meetings until his health would no longer allow.

Tom is survived by his wife of 64 years, Cynthia; his sister, Barbara Ferguson of Littleton, Colorado; daughter and son-in-law, Kerstin and Bill Eckstrom of Lincoln; daughter and son-in-law, Lynne and Tim Petro of Birmingham, Alabama; son and daughter-in-law, Tom and Kim Olson of Lincoln; his grandchildren Will, Claire and Maddie Eckstrom, Hamilton Keller, Matthew Petro and his wife Amanda, Kelly Neely and her husband Ross, and John Petro, and Tommy and Marin Olson; his three great-grandchildren; and many nieces, nephews and friends.

He is preceded in death by his parents, Harold and Helen Olson; his brother and sister-in-law Bill and Joyce Olson; sister and brother-in-law Marjorie and Gene Eaton; brother-in-law Charles Ferguson; and daughter-in-law Stacie Olson.

Celebration of Life to be held at 11AM on Tuesday, August 3rd at the Lisco Presbyterian Church, Lisco, NE. In lieu of flowers, please send memorials to be distributed to Tom’s favorite charitable organizations: