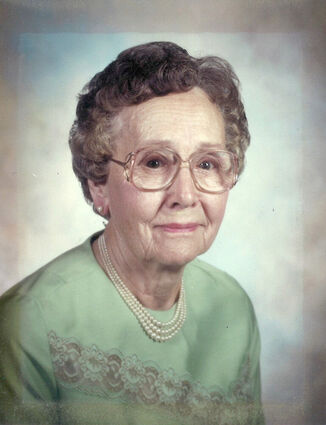 Dorys G. Fehringer, age 101, of Peetz, CO passed away peacefully with family by her side at Sidney Regional Medical Center on August 7, 2021. No public viewing or visitation is planned at this time. A Mass of Christian Burial will be Monday, August 16, at 10:30 A.M. at the Sacred Heart Catholic Church in Peetz, CO with Father Mike Bodzioch officiating. Services will be recorded and available on our website for viewing. Burial will follow in the Sacred Heart Cemetery in Peetz. Memorials may be sent to Sacred Heart Catholic Church, Peetz American Legion Auxiliary, or Peetz Community Development Fund.

You may view Dorys’ Book of Memories, leave condolences, photos and stories at http://www.gehrigstittchapel.com.

A life well lived, Dorys reached the age of 101. Born April 12, 1920, at their modest farm home southwest of Sidney, NE, she was the second daughter of John and Mary (Nelson) Treinen. Dorys began school in a one-room schoolhouse when she was five years old. In the second semester of second grade, she advanced to third grade—she was only seven. In the fifth grade, Dorys and her sister Dorothy boarded at St. Patrick’s Academy in Sidney in order to prepare for First Communion. The family moved into Sidney briefly, but then returned to the farm where she re-entered country school. She attended Saint Patrick’s once again for grades 7-12 where she graduated with honors in 1936 at the age of 16.

Dorys remained at home for two years after graduating, helping on the farm, especially enjoying outside chores. At 18, she earned a teaching certificate at Chadron State Teacher’s College. Her first assignment was at Larson School South of Potter, NE. In 1941, Dorys married George Edward Fehringer, the John Deere Implement dealer in Peetz, CO. He was soon drafted into the Army in August of 1942 to serve in WWII and was gone for 39 months. Dorys returned to live with her parents east of Lorenzo, NE. Their first child, Bernie, was born. They bought a farm one mile north of Peetz which became their home for many years. When George returned, five more children were born and raised on that farm. When the children were older, Dorys returned to college. First to Northeastern Junior College in Sterling, CO, graduating with an associate degree in 1966. She went on to earn a bachelor’s degree from University of Northern Colorado in Greeley, CO, in 1970. From then on, she served as a substitute teacher for Peetz School until 2010 when she was 90 years of age. She was delighted to teach a handful of her own grandchildren and great-grandchildren attending Peetz School. She was known to many students and faculty at the Peetz School as “Aunt Dorys”.

Dorys participated fully in community life in Peetz. She taught catechism, played the organ, and was a member of Altar Society for Sacred Heart Catholic Church. She was an active member of Rocky Mountain Farmers Union advocating for family farms and Colorado agriculture. RMFU honored Dorys in 2005 for serving as a Logan County education director and youth leader for 40 years, and the Family of the Year Award in 2010. Dorys also participated in the American Legion Auxiliary at the local and state levels. The Peetz School could count on Dorys to plan wonderful Veterans Day programs, coloring and speech contests, and coordinate scholarship applications. She was also active in the Girl Scouts of America for many years. She supported the Saint Labre School on the Reservations in SD and MT, finding the needs there were enormous. For many years she would load up her car with donations including clothing, blankets and housewares and take it to the reservation. Dorys did not miss an opportunity to live out her faith; sharing her abundance and skills with others, help the elderly, remain in touch with friends, and teach children. She loved playing games and cards, especially Tripoley and Bridge.

In 1980 she moved from the family farm to a country home. Dorys loved being outside and was meticulous about her yard—pulling weeds, harvesting buffalo grass seed, mowing weekly, and carefully caring for flowers. She loved burning dried tumbleweeds so they would never cross her property again or become lodged in the tree line in the ever-present, changing winds of northeast Colorado.

When she wasn’t outside, Dorys was passionate about making the perfect chocolate birthday cake and cherry rolls for special occasions. She was known for garlic pickles, dandelion wine, her holiday fruitcake, and Danish ebelskivers. She lived in her home until­­­­­­­­ May 2017 when she moved to assisted living and then extended care at Sidney Regional Medical Center.

Dorys lived a very long and accomplished life. Many friends, students, and family have tender memories of something they learned from her. She will be remembered for her tenacious, giving spirit.