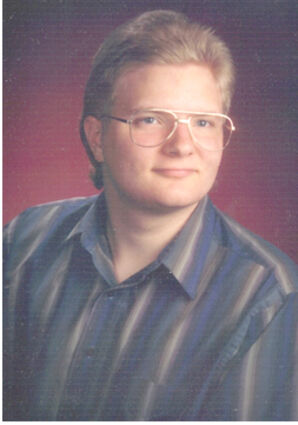 Michael Jr. was born on April 13, 1979 in Cherokee, Iowa, the firstborn son of Michael K. Sullivan Sr. and Ruth M. Sullivan. He attended public school and was home-schooled in the 6th grade through high school. He graduated high school in 1998 and attended Baker College for two years where he studied computer science. Later he moved to California to pursue a career working with computer software.

Mike Jr. was intelligent, passionate, creative and kindhearted. He enjoyed reading books, his pets, his friends and his computers. He was loved by his family and friends.

Memorial services in honor of Michael K. Sullivan Jr. will be held at the Dalton Assembly of God Church in Dalton, NE on September 4th at 10:30 am. Refreshments will follow.

A memorial for Michael will be donated to the Assembly of God campground, The Crossings, for teen or children’s camps.

Michael Jr. was cremated and his ashes will be buried with his paternal grandmother, Peggy Christianson, at St. Petri Cemetery in Nome, North Dakota.