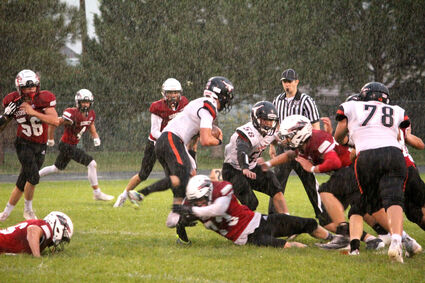 Sidney's Red Raider Football team hosted the Chase County Longhorns Friday night, and it took an impressive Sidney defensive stand near the end of the game to secure the narrow 8-to-6 victory for the Red Raiders.

The Chase County team had not won a game since defeating the Red Raiders back in October of 2019, but with three talented runners, the Red Raiders knew the Longhorns would provide a challenge. The game began as a downpour started, sending sheets of rain down onto the field, causing the Sidney faithful and the Chase County fans to scramble for cover.

Fortunately, the deluge ended quickly, and by the middle of the first quarter the precipitation was limited to a fine mist that ended by halftime.

Chase County started on offense and were led by the running of senior quarterback Ryan Bernhardt. Bernhardt was able to break some big gains, but the Sidney defense was able to regroup and force a turnover on downs at the 16 yard line. The Sidney running game was able to gain ground, alternating between senior Nathan Kennedy and sophomore Luke Holly, and drove all the way down the field until sophomore quarterback Isak Doty plunged for one yard and a touchdown. Sidney converted on the two point attempt to take an 8-to-0 lead. Chase County was able to again break some big runs by Bernhardt, but Sidney eventually forced a punt to the Red Raider 12 yard line. Again the Red Raiders were able to gain ground with Kennedy, Holly and junior Cam Leeling, but their drive stalled from penalties, forcing a punt to the midfield. Chase County started to drive, but a mishalded snap resulted in a recovered fumble by Sidney sophomore Boone Hicks. Throughout the first half, both teams were able to run the ball between the twenties, but only Sidney could push through for a score. Penalties and miscues stymied the Red Raider offense, unlike the relatively clean game they played in their opener against Bridgeport. However, the Sidney defense laid down big hits and shut down the Longhorns' offense when they needed a stop.

Sidney started with the ball in the second half on their own 31 yard line, and a big run down the left side by sophomore Isak Doty was called back by a penalty. Sidney recovered and earned a first down and then another big run by Doty was called back by a penalty. The Raiders were forced to punt, but a low snap had punter Nathan Kennedy secure the ball and try to run for a first down, but the Chase County defense stiffened and the Sidney turned the ball over on downs at their own 39 yard line. Chase County then started mixing up their running attack.

With Bernhardt getting almost every touch in the first half, the Longhorns then mixed their running attack up with carries by juniors Carter Leibbrandt and Dawson Mollendor. Although a few big gains were realized, Sidney was able to hold the Longhorns out of the endzone, but a feeling that Chase County was going to break a long run for points was starting to settle in amongst the crowd. A few possessions later, alternating between Leibbrandt and Mollendor, the Longhorns were able to get into scoring position and Mollendor broke through for a seven yard touchdown run. Mollendor tried for a two point conversion, but was stopped short to keep Sidney ahead 8-to-6.

After Luke Holly returned the ensuing kickoff to midfield, an underthorwn pass by Doty was intercepted by Bernhardt to give Chase County another chance. The Sidney defense stiffened, and Chase County was flagged for holding, causing a fourth and 15 punt. Sidney junior Micah Schneider called for a fair catch, but couldn't secure the ball and Chase County recovered on the Sidney six yard line. The Sidney defense stiffened, causing a loss of 1 yard on first down, no gain on second down, and a short two yard gain on third down. On fourth and goal from the four yard line, Bernhardt tried to find his way into the endzone but was stuffed by the Sidney line, causing a turnover on downs.

Sidney then took over on their four yard line and methodically marched down the field, eating up as much clock as possible. However, many of the yards gained had to gained again as Sidney was hit by holding penalties, false starts, and multiple personal fouls. But the Red Raiders kept converting and gaining first downs, eventually burning up the clock and took a knee to run the remaining seconds off of the scoreboard to secure the 8-to-6 win. Sidney rushed the ball 41 times for 257 yards, and both Kennedy and Holly each cracked the 100 yard mark in the game. Sidney was hampered by 12 penalties for 100 yards and two turnovers in the win.

Sidney Head Coach Todd Ekhart was pleased for the victory, but was unhappy with the sloppy play and 12 penalties committed by his team.

“We didn't play disciplined and we had guys getting penalties on holds and illegal blocks when they were way behind the play. We have to work on that. Let's just say we survived this game”, said Ekhart.

Sidney now goes into the difficult section of their schedule, facing off against Cozad on the road on Friday. The Red Raiders look strong running the ball and on defense, but the team needs to play more disciplined football and keep the penalties to a minimum if they hope to continue their early season success.