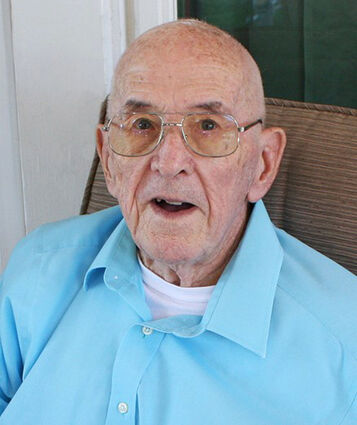 Clifford F. Dress, age 91, of Sidney, NE passed away Tuesday, September 14, 2021 in Sidney. A Mass of Christian Burial will be held at 10:30 A.M. Saturday, September 18, 2021, in the St. Patrick’s Catholic Church in Sidney, NE with a Rosary Service at 10:00 A.M. with Father C.P. Varghese officiating. Interment will be in the Greenwood Cemetery in Sidney. Services will be recorded and available on our website for viewing. Friends may stop at the Gehrig-Stitt Chapel on Friday from 1:00 to 6:00 P.M.

You may view Clifford’s Book of Memories, leave condolences, photos and stories at http://www.gehrigstittchapel.com.

Clifford Francis Dress was born at the family home near Platte Center, NE, on August 1, 1930, to Everard Dress and Florence (Foglesong) Dress. He attended grade school in Columbus, NE. The family later moved to Plattsmouth, NE, where he attended a country school for four years. Cliff would ride his horse to school and leave it at the neighbor’s house until school was out. The family moved back to Columbus where he attended St. Bonadventure until they moved to Sidney, NE, in 1944, where he graduated from St. Patrick’s High School in 1948. Following high school, he went to work at the Sidney Post Office as a mail carrier.

In 1950, Cliff enlisted in the United States Air Force. He was stationed in San Antonio, TX; Lowry Air Force Base in Denver, CO; Carswell Air Force base in Fort Worth, TX; FE Warren AFB in Cheyenne, WY; and in Sidi Slimane, Morocco, for a year. One of his most memorable moments while in the service was his plane landing on the Rock of Gibraltar. When he returned to the states, he was sent to Fairchild Air Force Base in Spokane, WA, for the remainder of his enlistment. He was a Staff Sergeant when he was discharged in 1954.

Cliff met Rita Dunphy at a USO dance while in Spokane. They married on September 25, 1954, at St. Vincent De Paul Catholic Church in Burke, ID, and moved to Sidney, NE, where they raised six children, Kathleen, Barbara, Dale, Janet, Susan and Diane. Cliff returned to the post office working as a postal clerk. He retired in 1989 after 41 years. Cliff and Rita also owned Dress Janitorial for many years before retiring the business.

It wasn’t unusual to see Cliff out on his ten-speed bike – this was also his preferred mode of transportation for getting himself to work. He enjoyed watching basketball and football, following the Nuggets, the Broncos, and the Huskers. His true passion was polka dancing. Cliff and Rita loved spending their Saturday nights dancing at the Elks Club. They would also travel across the state to enjoy Polka Fests – Wahoo being one of their favorite places to dance.