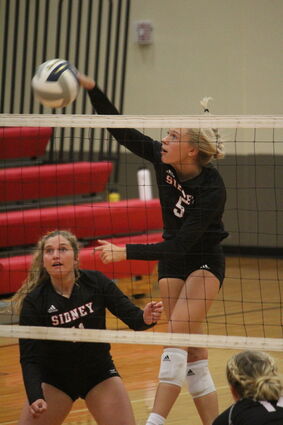 Sidney's Lady Raider Volleyball team stumbled after a well-played opening win against a strong Sterling, Colorado team at the end of August, but three straight losses showed that the young and talented athletes still needed some time playing together to become a consistent team.

The second set again started with Mitchell scoring only to have Sidney go on a run to take the lead. Both teams played the set very well, with intense rallies by both squads. Sidney was able to gain a lead late in the set powered by three kills in a row by freshman Kayla Westby, and closed out Mitchell with a service Ace by senior Brynna Ross to take the second set, 25-to-21.

The third set had the teams trading scores and featured strong net play by Sidney's Gabrielle Fortner and Emilee Wieser and Mitchell's Caani Banks, Macey Bosard and Trinity Penn. The teams battled through the set until Mitchell was able to pull away and win the set 25-to-18.

As in the previous sets, Sidney struggled with service errors, with five in each of the three sets. The fourth set started out as a tight battle, but despite another five service errors, Sidney was able to surge and take the fourth set 25-to-17. The fifth and final set had both teams trading leads until the set was tied at 10-to-10. Sidney then faltered with two bad points in a row, and Mitchell took advantage of the breakdown. Mitchell pulled away, and Sidney's efforts to regain the lead were hampered by hitting errors, and the Lady Tigers were able to finish the set with a 15-to-13 victory for the 3-to-2 match victory. Sidney had 22 service errors in the match, which turned out to be the difference between a win and a loss. Hitting and positioning errors also cost the Lady Raiders.

Head Coach Julie Smith said, “We have a lot of inexperienced players working together on the court. All of our athletes are in roles that are much different than last year. Self-confidence plays a key role in the new adjustments for the season.”

Smith saw the Cozad Tournament as an opportunity for Sidney to “establish who we are as a team”, and started the weekend tournament with a match up against Gothenburg.

After defeating the Lady Swedes 25-to-20 in the first set, Gothenberg regrouped and took the next two sets 25-to-22 for the 2-to-1 match victory. Sidney shook off the loss and next faced Valentine, and after a 25-to-20 first set win, had a battle in the second set with the Lady Badgers, with Valentine outlasting Sidney for a 26-to-24 second set win. Sidney recovered and played well in the third, easily taking the 25-to-13 win for the 2-to-1 match victory.

Sidney finished the tournament against St. Cecilia's and played three tight sets against the Lady Bluehawks, dropping the first set 25-to-22, then recovering and taking the next two sets 25-to-22 and 25-to-23 for the 2-to-1 match victory. Sidney moves their record to 3-and-4 on the season, and were next scheduled to travel to Bridgeport for triangular with the hosts and the Chadron Lady Cardinals on Tuesday.