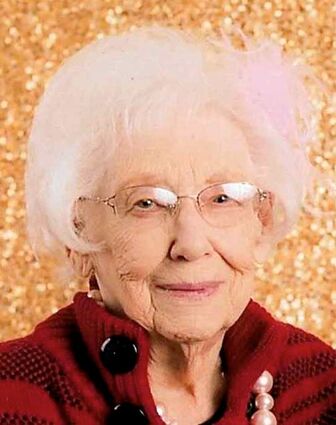 She and Chick moved to Sloan’s Assisted Living Sidney in 2016 to be closer to family.

Beatrice L. “Beeb” Kuskie was born April 22, 1919 on a farm in Perkins County, Nebraska, the second daughter of Bert & Margaret (Dodge) Kuskie.  She attended school in Brule, graduating from Brule High School in 1937.  She attended the University of Northern Colorado in Greeley, CO majoring in Elementary Education.

On August 15, 1941, she married her “childhood sweetheart” Harold Richard Kampfe, at her family home in Brule.  They recently celebrated their 80th Wedding Anniversary.  They were blessed with two children, Sharon Marie and Richard Paul.  The couple resided in Brule where they raised their children and lived their entire life.

Beeb worked in the family-owned general store (Kampfe’s Store) for over 20 yrs. doing the gift and dry goods buying.  She also helped manage their farm property in Keith & Perkins Co.

Beatrice was baptized and confirmed on July 24, 1942 and took an active part in St. John’s Lutheran Church for almost 70 years having taught Jr. High Sunday School, Catechism classes, was a long-time choir member, and held several offices in the Lutheran Women’s Missionary League.

She enjoyed making banners for the church with her friend Jean Tjaden.  Beeb was also a Charter member of the Brule Lioness’ Club.

She had many interests including music, reading, travel, watching sports, attending Bible Class, working in the yard, tending her flowers, and playing cards with friends.  Family was always important to her.

In lieu of flowers, memorials may be designated to the Brule Fire Dept. or St. John’s Lutheran Church.

Funeral services will be held at 10:00 a.m. on Wednesday, October 6, 2021 at St. John’s Lutheran Church in Brule with Reverend Jon Dickmander officiating.  Burial will be in the Brule Cemetery.

Memorial book signing will be on Tuesday, from 1 pm until 6 pm at the Prairie Hills Funeral Home of Ogallala.

Arrangements have been entrusted to Prairie Hills Funeral Home in Ogallala.