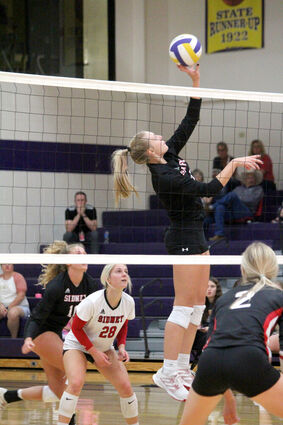 Sidney’s Lady Raider Volleyball team overcame a slow start to the season and got back on the winning track, but a rough stretch over the past week has dropped their record to 6-and-10 going into a key matchup against Scottsbluff scheduled for Tuesday.

The week started with an away match on Tuesday against the Chase County Lady Longhorns, and the home squad pulled ahead with a 25-to-22 first set victory. Sidney regrouped and found their rhythm, and took the second set 25-to-22. But they could not maintain that momentum, and dropped the next two sets 25-to-21 and 25-to-17 for the 3-to-1 match loss. Senior Alecca Campbell led the offense with 10 kills in the match, and junior Reese Riddle had 11 assists in the loss.

Sidney then traveled on Thursday to Gering for matchups with the Lady Bulldogs and the Mitchell Lady Tigers. First the Lady Raiders faced off against Gering, and were able to take the match in three sets, 25-to-17, 18-to-25, and 25-to-19. However, the second match against Mitchell did not go as well with the Lady Raiders falling in straight sets, 17-to-25 and 25-to-27. Karsyn Leeling led the offense in the loss with 7 kills.

Sidney looks to get back on track against Scottsbluff on Tuesday prior to the Twin Cities Tournament on Friday and Saturday.