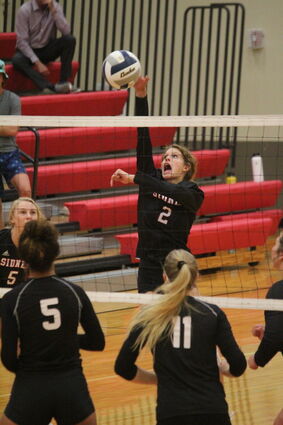 Sidney’s Lady Raider Volleyball team had struggled in the early part of the season before they found their footing and started to win matches. But winning six out of seven matches over the last week has put Sidney back over the .500 mark, with a 12-and-11 record for the season.

Sidney’s week started with a trip to Scottsbluff on Tuesday, September 28. The Lady Bearcats had also struggled to begin their season, and the Lady Raiders took advantage with a hot start, taking the first set 25-to-18. Sidney kept up their aggressiveness and never the the Lady Bearcats get close, putting away Scottsbluff in the next two sets 25-to-14 and 25-to-13 for the 3-to-0 match victory.

Senior Alecca Campbell led the offense with eight kills in the match while senior Brynna Ross had 16 assists in the victory.

Sidney then traveled for tournament action on Friday and Saturday, and first faced off against the Rapid City Central team from South Dakota. After dropping the first set 25-to-21 against the Lady Cobblers, the Lady Raiders regrouped and took the next two sets 25-to-19 and 25-to-14 for the 2-to-1 match victory. Sophomore Karsyn Leeling led the offense for Sidney with 11 kills in the match. Next up was Alliance, a team the Lady Raiders had beaten in mid-September in three straight sets. Sidney came out strong, battling the Lady Bulldogs to take the first set 25-to-20, but Alliance recovered and played better in the second set, defeating Sidney 25-to-20.

The Lady Raiders then poured it on in the third set and pulled away for a 25-to-12 set victory and a 2-to-1 match victory.Campbell led with nine kills, and junior Rheagan Stanley had three Ace Serves in the win. Sidney finished up their Friday night action with a match against Burns, Wyo,. And put down the Lady Broncs in straight sets 25-to-21 and 25-to-20 for the 2-to-0 match victory.

On Saturday, the Lady Raiders matched up first against the Chadron Lady Cardinals, and got off to a slow start by dropping the first set 25-to-18. But the Lady Raiders battled back, forcing extra points in the second set before winning 26-to-24, then putting away the Lady Cardinals 25-to-18 in the the third set for the 2-to-1 match victory.

Sidney next faced the Ogallala Lady Indians, and the Ogallala team played a strong match, putting down Sidney in straight sets, 25-to-18 and 25-to-14 for the 2-to-0 match victory. Sidney then ended their day with a match against McCook, and it was a tough battle for both teams, but Sidney took the straight set victory 25-to-22 and 25-to-20.

Sidney improves to 12-and-11 on the year and next travels to Colorado on Thursday to face off against the 6-and-7 Yuma Lady Indians.