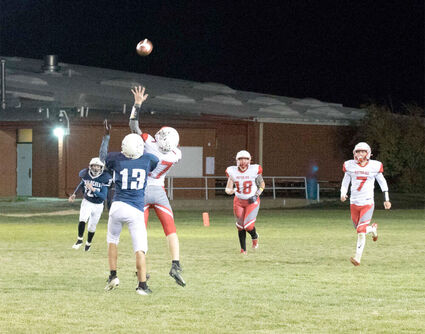 Potter-Dix's Coyote Football team moved their record to 7-and-0 with a rout of the Banner County Wildcats in Harrisburg Friday night. The Coyotes dominated in all aspects of the game, and only a late score by Banner County well after the contest had been decided prevented a shutout.

The Coyotes scored early and often, quickly putting the game out of reach for the over-matched Wildcats. Nine different Coyotes scored touchdowns in the game, with 13 total touchdowns for Potter-Dix in the contest.

The Coyotes only attempted six passes, and five were completed. Two of the five completions went for touchdowns. The Coyotes kept the ball on the ground for most of the game, rushing for 333 yards on 27 attempts. Sophomore Jaxen Buettenback led the attack with 12 rushes for 126 yards and two touchdowns.

On defense, senior Jared Anton led with 10 tackles, with six tackles for losses. He also had an interception in the win. Sophomore Caden McConnell had two interceptions in the game and recovered a fumble.

The Coyotes close their regular season against the Creek Valley Storm on Friday. The Storm come in with a 3-and-4 record, and a big come from behind win against South Platte last Friday. The game is in Potter at Combs Field, and kickoff is scheduled for 7 p.m.