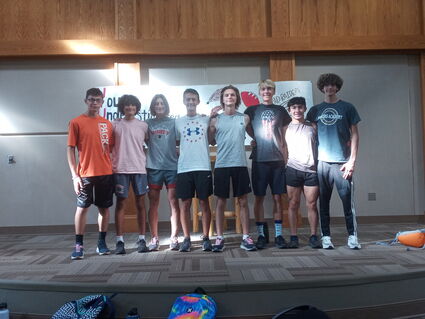 For the boy’s squad, senior Daniel Bashtovoi took the individual title with a time of 16:27 on the 5k course. Senior Cameron Brauer placed second with a time of 16:42 and senior Mitch Deer took fourth place with a time of 17:04. A late burst in the last 100 meters gave senior Treyson Johnstone 10th place at 17:28 to give the boys a score of 16, and helped secure the championship for the Sidney boys.

It is no surprise that the Sidney teams have been so successful, especially on the boy’s side. Sidney has a top-notch Cross Country program headed by Donna Weideburg that starts their runners in Elementary School, gives them more and quality experience through Middle School, and has them ready to compete for championships in High School.

Also, Cross country in Sidney can be a family affair, with brothers and sisters all participating in the sport, and benefiting from the experience and dedication from their siblings. Back in 2018, we had a chance to visit with the State Championship boy’s team that had two sets of brothers in their top seven runners. Senior captain Collin Brauer and freshman Cameron Brauer, and junior Ben Bashtovoi and freshman Daniel Bashtovoi were a big part of the Class C State Championship team. Three years later we were able to catch up with the younger Brauer and Bashtovoi brothers, and also speak with the other starting members of the team.

Cameron Brauer spoke a bit about his older brother Collin, who is currently studying to be a doctor and plans on getting married next year. Cameron remembers being inspired to run Cross Country watching his brother Collin, although now Cameron prefers running track and specializes in the Mile Run. Cameron does not have a definite plan for himself after High School, as he prefers to live in the present and take life as it comes to him. When asked if he plans on attending college, he said, “Definitely maybe. I’d say 50-50 chance”, with a grin. When asked what his favorite subject is, he said “Well, if you’re going to put it in the paper, say I love Math and all academics”, which prompted a burst of laughter from his teammates.

Daniel Bashtovoi’s older brother Ben is currently pursuing a degree in Mechanical Engineering, while Daniel is looking to major in Biomedical Engineering, hopefully at University of Nebraska. Ben started when he was younger in Track, and Daniel gravitated towards Cross Country. Ben eventually switched over to Cross Country, and the brothers ran together as much as possible.

Daniel and Cameron are the team leaders, but said it’s not to difficult to motivate the other team members, especially during the summer when they battle the heat and the hills to prepare for the season.

“We all rely on each other, and the reason we’ve been so successful is that we operate as a team, always”, said Brauer.

“What’s great about our team is that we operate in “packs”, and we’ve been doing that in practices as well as meets. Basically, if one of us is struggling, there’s a teammate right next to him to encourage and keep him going. If someone’s behind you and should be up with you, you can encourage them to step it up”, said Bashtovoi.

Mitchell Deer is now a senior, and was part of the 2018 State Championship team. He has improved every season, and is now one of the Red Raiders most reliable runners. He started running early, finishing his first 5k in third grade. Besides Cross Country, he also runs mid-distance on the Track team.

Senior Treyson Johnstone moved from Caliche to Sidney was he was a freshman. He was interested in running and Cross Country and quickly fell in with his teammates and became a valuable member of the squad. He also runs track and is interested on pursuing a degree in Biomedical Engineering.

Freshman Jashawn Davenport got his start running track in Middle School, and was recruited for Cross Country by Coach Weideburg. He has quickly developed into one of the team’s leaders. “Coach Weideburg is amazing. She knows what’s good for us and conducts practices by always focusing on what we need to do to improve for the next race”, said Davenport.

Senior Julian Maytorena started running when he was younger, and is best friends with Mitch Deer. The pair have been running together nearly all their lives. He got involved with Cross Country by being friends with Mitch and a few other teammates, and he also wrestles for the Red Raiders. He plans on attending University of Nebraska at Lincoln and is interested in studying sports medicine and nutrition.

Senior Tre Canas was doing 5k’s with Mitch and Julian back in fourth grade, and have been running together ever since. He is currently taking Nursing classes at WNCC and plans on going full time into the Nursing program when he graduates.

Freshman Noah Canas started with football when he was young, but then moved towards Cross Country and track with his brother Tre and friends Mitch and Julian.

After the season opener, it was clear that the team that would win the State Title will need to have the strongest third and fourth runner to score as best as possible.

Daniel said, “We’ve been very focused on getting our third and fourth runners consistent and strong. We also know the State Championship course in Kearney very well, and know when to take advantage in the downhills and when the wind will be at your back. Coach Weideburg has been key to getting us to understand the courses and where to take advantage of features of the course.

Broken Bow and Gothenburg were the teams to challenge Sidney in the Districts, but defending State Champion Milford is the team that Sidney is looking to knock off at the State Meet. With the experience and dedication this group has, and the knowledge and technique instilled in them by Coach Weideburg, Sidney looks to have another State Championship team in waiting, if all goes well.