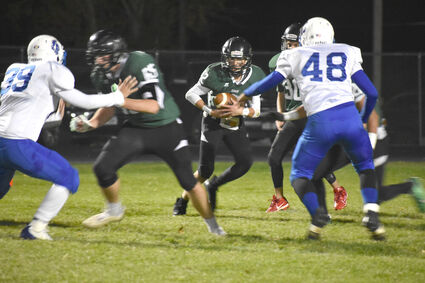 The Creek Valley Storm Football team headed into Thursday night’s contest versus South Platte with only seven players available due to injury. It was Senior Night in Chappell, and the Storm’s five seniors put on a show for the home crowd, with every senior playing every snap of the game.

The contest did not start well for the Storm, as they took their opening possession and drove down the field, only to turn the ball over on downs in South Platte territory. Creek Valley had a tough time containing senior Ethan Reichmann, who was able to run for a touchdown after four plays and give the Blue Knights and early 8-to-0 lead. Creek Valley’s next possession did not go any better, with senior quarterback Eli Schmid having a pass picked off by South Platte junior Naythen Brown. But the Storm caught a big break when on second down, a fumbled bad snap was recovered by senior Lucas Trujillo, his sixth fumble recovery of the season. Again, the Storm could not get their offense moving, and turned the ball over on downs on the South Platte 25 yard line. South Platte took over and on first down Reichmann blasted through the middle of the Storm defense for 55 yards and a touchdown, giving the visitors a 16-to-0 lead.

Creek Valley followed with another turnover on downs, but were able to hold off South Platte, forcing a turnover on downs on their own 18 yard line. Creek Valley finally got their offense in gear deep in their own territory at the start of the second quarter when a big run by Trujillo put the Storm in South Platte territory. Schmid then reeled in a one handed catch to move the ball to the 17, then Schmid found 6’ 4” senior Drew Fraass in the end zone for a touchdown strike to narrow the lead 16-to-8. South Platte answered quickly, with Reichmann blasting through the Storm defense for a 34 yard touchdown gallop to increase the lead to 24-to-8. But Creek Valley had a quick strike of their own, with Schmid taking the ensuing kickoff all they way back for a touchdown to make the score 24-to-14.

South Platte again drove and scored, this time on a 14 yard run by Reichmann to make the score 30-to-14. Creek Valley caught a big break at the end of the first half when Reichmann ran for 65 yards and a touchdown, only to have the play called back by a holding penalty. The Creek Valley defense stiffened and forced a turnover on downs, and at the half Creek Valley trailed 30-to-14.

South Platte scored to start the third quarter and increased their lead 36-to-14. On Creek Valley’s second possession of the half, starting from their own four yard line, Schmid found senior Ethan Togstad open, and Togstad made a diving catch for 34 yards to keep their drive going. Schmid then found Fraass and he rumbled to the one yard line. Schmid then found Togstad open in the end zone for a touchdown, and the score narrowed to 36-to-20. The Storm defense stiffened and forced a turnover on downs on South Platte’s next possession. Creek Valley then turned the ball over on down themselves, but on the Blue Knight’s next possession, Fraass had a big sack followed by a South Platte false start penalty which forced a punt on fourth and 33. Creek Valley struggled to move the ball, but on third and 20, Schmid found senior Chase Isenbart open, and he carried a few South Platte defenders as he gained the first down. The drive ended with a 13 yard touchdown pass to Fraass, and suddenly the score was 36-to-28.

Creek Valley tried an onside kick, but South Platte recovered on theh Storm’s 39 yard line. But the defense came up big again, after a penalty and a sack by Trujillo pushed them back, forcing a turnover on downs on a fourth and 21 play. Creek Valley took over deep in their own territory, but Schmid quickly found Trujillo open, and he jetted 65 yards for a touchdown, and the score was knotted at 36-to-36 with 2:52 left in the game.

South Platte went four and out, as Trujillo batted away a pass on fourth down. Creek Valley tried to drive, but found themselves in a fourth and 17 situation with 34 seconds left. Schmid rolled out to the sideline to look for a receiver, but saw open field on the opposite side and took off, scrambling 42 yards for a touchdown. The extra point was good, and Creek Valley led 44-to-36 with 22 seconds left to play. South Platte drove downfield in the remaining seconds, and with 4 seconds left to play, Reichmann scrambled, broke three tackles, and ran 26 yards for a touchdown. Creek Valley Head Coach Joe Kupper called a time out and set his team to block the extra point try. The snap was good, the hold was good, but the Storm surged and blocked the kick, and the game ended in a 44-to-42 Storm victory. It was an emotional win for the Storm near the end of a middling season, and the home crowd roared and celebrated enthusiastically. Kupper praised his seniors, who played every snap and never gave up, after the contest. Schmid was outstanding in the game, shaking off mistakes and rallying the team in the second half. He completed 12 of 27 passes for 248 yards, and rushed 9 times for 53 yards. All of the players, especially the seniors, put in a great effort with big plays and defensive stands in the second half that swung the game in Creek Valley’s favor.

Creek Valley moves its’ record to 3-and-4 and finishes the season in Potter on Friday against the 7-and-0 Coyotes.