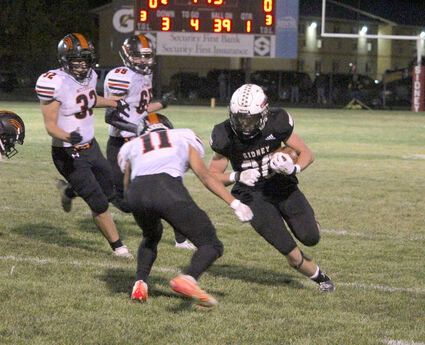 Sidney’s Red Raider Football team lost their final game of the season, as a late rally by the visiting Mitchell Tigers could not be stopped, and Sidney fell by three points to end their season.

Using a four man front on defense, the Red Raiders were able to contain Mitchell’s first drive of the game and force a punt.

The Raiders were forced to start three freshmen and multiple sophomores due to injury, but were able to get a rhythm established on offense early, and took their first possession deep into Tigers’ territory. Featuring senior running back Nathan Kennedy, Sidney scored first on a three yard run by the senior, and after a missed two point PAT led 6-to-0.

But the Tigers immediately answered, starting at their own 27 yard line and marching down the field to take a lead after a three yard touchdown plunge by sophomore Cael Peters and a successful PAT gave the visitors a 7-to-6 lead late in the first period.  Both teams played good defense in the second period and were unable to score, giving the Tigers a 7-to-6 lead at halftime.

Sidney received the ball to start the second half, and on the kickoff freshman Owen Gillham received the ball then handed it off to junior Cam Leeling who broke through the coverage all the way for a touchdown. But it was called back on an illegal block penalty, and the points were wiped off the scoring board. Undaunted, the Sidney offense started at their own 23 yard line and went on a 16 play drive, converting on two fourth downs during the drive, and culminated in another Kennedy touchdown run. Another missed PAT gave Sidney a 12-to-7 lead.

Again Mitchell responded with a long touchdown drive, ending with quarterback Carter Reisig scoring on a 12 yard touchdown dash, and with a successful PAT, the Tigers led 14-to-12 late in the third quarter.  Sidney drove the ball again but could not convert, and on fourth down they tried a fake punt that fell short of the first down.

Taking over on the Sidney 48, Mitchell fumbled the ball away on their first play from scrimmage, and Sidney recovered. After sophomore quarterback Isak Doty found freshman tight end Patrick McCartney for a 33 yard pass completion, Sidney was deep in Mitchell territory. But they could not punch the ball into the end zone, as the Mitchell defense stiffened and stopped Sidney on fourth down from the one yard line.

Mitchell took over deep in their own territory, and fumbled again to give Sidney the ball at the Tigers’ 14 yard line. Sidney could not break through and was forced to try a 30 yard field goal by Isak Doty on fourth down. The snap was high and skipped off of the holder's hands, but Doty was able to corral the ball in stride. He then shook off one tackler, broke open to the side, and found Gillham wide open in the end zone. Gillham secured the touchdown pass, and Sidney jumped ahead 18-to-14 after another missed PAT.

Mitchell got the ball back with over four minutes left in the game, and went on a drive that went 80 yards. They were able to convert on a few big pass plays. Sidney opted for maximum coverage rather than a big pass rush which worked for most plays, but the Tigers were able to convert first downs when necessary to keep the drive alive. Reisig scored again on a five yard touchdown run, and the Tigers took a 21-to-18 lead. Sidney got the ball back with one minute left, but could not sustain a drive. After a fourth and long pass fell incomplete, Mitchell took over, knelt down, and ran out the clock to escape Weymouth Field with a victory.

Sidney ends Head Coach Todd Ekart’s first year of his second tenure with the Raiders with a 2-and-7 record. Nathan Kennedy led all rushers in his final game, with 133 yards on 33 carries and two touchdowns. Doty finished 3-for-12 for 63 yards. Mitchell finishes with a 6-and-3 record, and just missed qualifying for the playoffs.