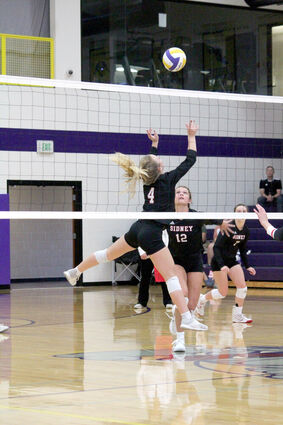 The Lady Raider Volleyball team had an active week, starting with a road match against Gering on Tuesday October 19, and ending in tournament action over the weekend.

Against Gering, the Lady Raiders opened strong and took the first set 25-to-16. The Lady Bulldogs upped their play in the second set, forcing extra points and putting pressure on the Lady Raiders before Sidney was able to finish off the the set 28-to-26. Sidney then took the final set 25-to-18 for the 3-to-0 match victory. Sophomore Karsyn Leeling led the offense with 14 kills, and junior Rheagan Stanley had 24 digs in the victory.

Sidney then traveled north on Saturday for the Alliance Pilfold Invitational, and matched up first with Lakota Tech out of Pine Ridge, South Dakota. The Lady Raiders had no trouble in this match, and won in straight sets, 25-to-9 and 25-to-16. Leeling again led with nine kills, while senior Brynna Ross and junior Reese Riddle each had eight assists in the victory.

Sidney next matched up with the Hill City Lady Rangers from South Dakota, and battled hard in the first set, forced extra points, but came up short 25-to-27. The Lady Raiders regrouped and rebounded strongly, taking the second set 25-to-15 and the third set 25-to-23 for the 2-to-1 match victory. Campbell again led with 15 kills and had two blocks, while Ross and Riddle had 14 assists each in the win.

The final match for Sidney was against Yuma, Co., a team the Lady Raiders had beaten in the beginning of October on their home court, and this contest had a similar outcome.

The Lady Raiders came out firing and took the first set 25-to-17, then bore down and took the second set 25-to-19 for the 2-to-0 victory. The long day ended with the Lady Raiders winning three of four matches in the tournament, and adding in the Gering win on Tuesday, four more victories for the year. This moves the Lady Raider record to 19-and-14 as they next host the B-8 Subdistrict Tournament, starting on Tuesday, October 26 at Sidney High School. The number 1 seed Lady Raiders were scheduled to face number 4 seed Gering Tuesday at 5:30 p.m.