With All of the Changes, The Big Screen Still Draws a Crowd 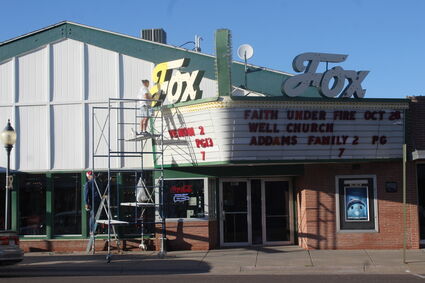 In the early part of the 20th century, theaters were a community staple, a social event. The U.S.A. Theatre in Sidney was built during the big theatre boom during the World War 1 period as a diversion from the horrors of war, according to cinematreasures.org.

The 1020 Illinois St. attraction opened on Aug. 11, 1917 with William Night in “The Blue Streak” and Billie Richie in “The House of Terrible Scandals.” It was also during a time when theater attendance was motivated by air conditioners, a luxury not afforded by many families.

John Phillips has been the lead for the Fox Theatre in Sidney for more than half of the 70 years of history.

Phillips has spent much of his adult life in the film industry.

He was trained to change the marquee, then to be a projectionist.

The first theatre he operated was in Craig, Colo., then he managed the Fox Theatre in Sterling for a company.

The Fox Theatre in Sidney was in bankruptcy when Phillips moved to Sidney. He met with the officials of what was then American National Bank, submitted a business plan and started building his history in Sidney.

Phillips recalls the years of working with the public. It was and continues to be about offering entertainment in a public venue. The change in technology from 8 mm film, 35 mm and into the digital age, The Fox Theatre has kept pace with the changes. Along the way, there were debates of the future of the movie industry. What has remained is the interest in escape entertainment in a public place.

When the world is in turmoil, there is always the option of watching a hero on the big screen while enjoying a bucket of popcorn and a drink.

The other side of the counter is like defining a glacier; what is seen is only part of the what really takes place. Phillips said owning and operating a theatre is time-intensive and takes a lot of commitment. He said most people don't realize the amount of daytime work necessary for a night showing of a movie.

“If you're really good at it, nobody knew,” he said.

He also has memories of taping film when it breaks in or prior to showing.

Now with the digital age, theatre managers pay for access to movies. If the “switch” is sent incorrectly, the theatre cannot show the movie.

What has remained the same is the community support of the theatre, and seeing a movie in a public atmosphere.

“Through the years, there's been a lot of good people here,” Phillips said.

He said COVID has shown how much interest the community has in keeping a community theatre. On several occasions, businesses, organizations and residents would sponsor a movie for the night.

“The community has been very generous to me,” he said.

On Nov. 13, the Fox Theatre will be celebrating 70 years in Sidney with a live remote, hors d'oeuvres and a 1 p.m. showing of “African Queen.”