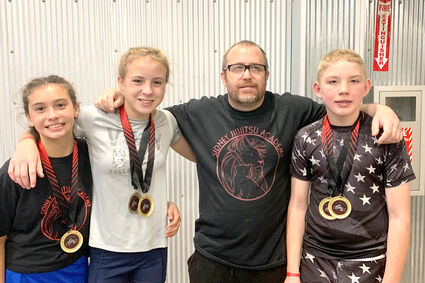 Several members of the Sidney Jiu-Jitsu Academy, under the tutelage of Derek Hill, traveled to Greeley, Co., on October 30 and competed at the Colorado Jiu Jitsu Club 10 Tournament. The event was for Jiu-Jitsu competitors, a martial art that relies on technique, leverage, timing and balance instead of speed and strength. Jiu-Jitsu, especially Brazilian Jiu-Jitsu as popularized by the Gracie Family and UFC Competitions, is taught by Derek Hill of the Sidney Jiu-Jitsu Academy at The Foundry in Sidney.

Three of Hill’s students had success at the day-long tournament in Greeley, and all three have qualified to compete at the Colorado State Tournament on November 20.

There are two different divisions in the competitions, Gi and No-Gi. A Gi is a traditional martial arts uniform that practitioners wear in practice and competitions. No-Gi means that competitors are not wearing a Gi, instead they are typically wearing t-shirts and shorts.

14 year old Nevaeh Killham, a white belt, won gold in No-Gi and silver in Gi in her age group.

12 year old Cain Hill won gold in both the No-Gi and Gi divisions for his age group. All three qualify and move on to the Colorado State Tournament on November 20.