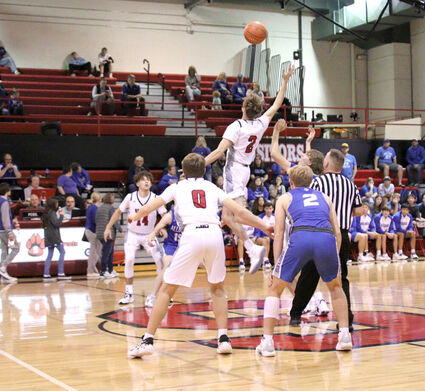 Sidney's Red Raider Basketball team had not started well in the opening Western Conference Tournament the last few seasons, but some good play and tenacity over the weekend gave the Red Raiders a good start to their season with a 2-and-1 record and a third place win in the consolation game at the WCT on Saturday.

Opening with a victory against Alliance, the Red Raiders had to adjust to a Bulldog team that fell behind but continued stay within striking distance, pushing the Raiders the entire game. The Raiders were able to pull away for the 10 point 56-to-46 win to advance, with sophomore Isak Doty's 20 points leading the Sidney scoring.

After a tough match-up against Sterling, Colo., on Friday that had the Raiders stay close with the eventual tournament runner-up through the first half. Sidney was able to make a second half run to cut the lead down to eight points, but Sterling went on a tear at the three point line and put away the Raiders by a final of 73-to-57. Doty again led with 15 points, on five three point shots. Senior Sawyer Dickman had 12 points in the loss. Sidney then advanced to the third place game against Chadron after the Cardinals lost to Scottsbluff 67-to-45 in the earlier semi-final game.

Sidney started strong against Chadron, reeling off a series of three pointers and opening a 20-to-12 lead through the first period. Sidney continued their hot shooting into the second quarter and opened a 16 point halftime lead, 41-to-25.

The Raiders settled in in the second half while the Cardinals slowly wore away the Sidney lead, bringing it down to 46-to-38 at the start of the fourth quarter. Chadron took their first lead after a 10-to-0 run had the Raiders offense ice cold and trailing by two.

Sidney regrouped and responded with a Doty three pointer, and a 53-to-53 tie with 90 seconds remaining. Sidney worked the clock, eventually inbounding the ball with Dickman finding junior Jacob Dowse who put the ball in off the glass as time expired to lift Sidney to a 55-to-53 victory and third place finish for the Western Conference Tournament. Senior Micah Schneider and sophomore Isak Doty each had 14 points, and Dowse had 12 points in the victory.

The Red Raiders next return to the court on Friday Dec. 10 in Sidney as they host the Chase County Longhorns at the Cabela's Athletic Facility.