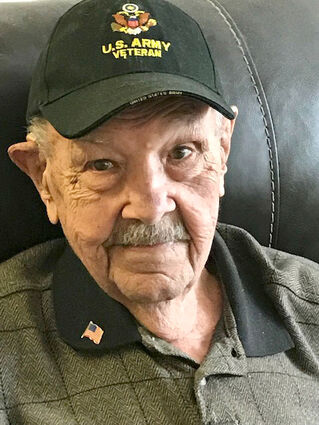 Friends were invited to stop at the Gehrig-Stitt Chapel on Tuesday, December 14, 2021 from 9-12:00 P.M. to sign Robert’s register book and leave condolences for the family. Memorials can be made to the American Lung Association.

You may view Robert’s Book of Memories, leave condolences, photos and stories at http://www.gehrigstittchapel.com.

Robert “Bob” Kies was born in Sac County Iowa in the township of Viola on February 27, 1928, to Frebert and Caroline Ackerman Kies. He Married Mary Lou Jenks on September 7 1950 in Sidney, NE. Robert served in the Merchant Marines from 1945 to 1946 serving on the Steam Ship SS Chanute Victory out of New York, New York. In 1947, Bob graduated from Boyles College and went to work for the Union Pacific Railroad. On November 16, 1950 he entered the US Army and served through November 15, 1952. After Discharge Bob went back to work at Union Pacific Railroad and retired as Manager of Customer service in Cheyenne Wyoming. He loved to play golf, hunt and fish. He lived a long, full live and will be sorely missed.

He was Proceeded in death by his wife Mary and infant son, his father Frebert, mother Caroline, brothers Elmer, Orville, Raymond, his infant sister Laura, and his special friend Frances Lessman. One great-grandson Nicolas and great, great-granddaughter Adelina.