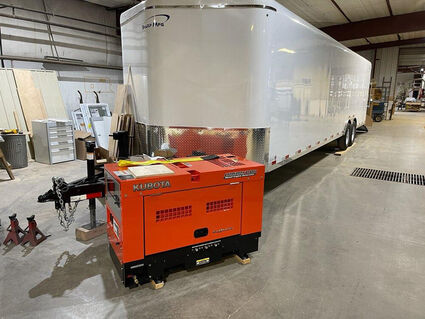 Sometimes getting something done just takes asking the right person the right question.

That, in part, resulted in a relationship that blessed Table of Grace with the future ability to take food to areas with limited transportation.

Table of Grace Director Sherri Eads heard of a need during a food give away this year; seniors in the Sunol community who couldn't get to the Table of Grace food pantry. She learned of this while talking to a gentleman who was taking food to people in Sunol.

She reached out to Sandhills Publishing to see if the company knew of a used trailer that would help fill the need.

Sandhills' history with Table of Grace started as the coronavirus-19 virus was being announced, according to Jim Hansen, community outreach coordinator for Sandhills. He said two years ago, after the 2019 Christmas season, Sidney employees wanted to donate to Table of Grace. Company owners Shawn and Sarah Reed learned of the interest in supporting the program and put Hansen on the job. Hansen said he saw Table of Grace as inadequate for they were trying to do. He said he and Eads have been in contact this summer and the concept of a mobile food pantry was discussed.

“It is Nebraskans helping other Nebraskans,” Hansen said.

“We saw a need. Adams saw a need,” he said. “It has been a tremendous partnership between Sandhills and Adams.”

He added the mobile food pantry is a design that is rare between Colorado's Front Range and eastern Nebraska.

Brian Booe, of Adams Industries, credits Sandhills for getting the process underway. He said as a welder, project can be modified to the extent of the customer's imagination. The mobile food pantry units measure 102 inches wide by 30 feet long and designed with a full size freezer and a half-freezer. The energy needs of the trailer requires installation of a 14,000 watt generator. Being asked to take part in the project is a privilege,” Booe said.

“I've lived in Sidney almost 16 years. It's kind of nice to give back.

He added the trailer is designed such that it could be used for an emergency response.

“Its not just a Sidney thing,” he said. “It is the surrounding area.”

Hansen said the Sandhills company and its owners have a number of community passions, including children and basic needs of families.

“They want children to have a great experience growing up. It's the right thing to do,” he said.

Hansen said completion of the first trailer is expected in mid January 2022.

With the addition of the mobile food pantry, Table of Grace will be seeking volunteer and financial support to maintain the pickup truck and trailer. When the trailer is available for service, Eads expects a rotation of six stops within a 60 mile radius of Sidney. The schedule will depend on need and the number of volunteers available. To volunteer with the Table of Grace, call 308-765-0362.

Overall, the Eads see the partnership with Sandhills and Adams Industries as a godsend, literally.

“When you open yourself up to God's will, watch out,” she said.

Table of Grace was also gifted with a second van. 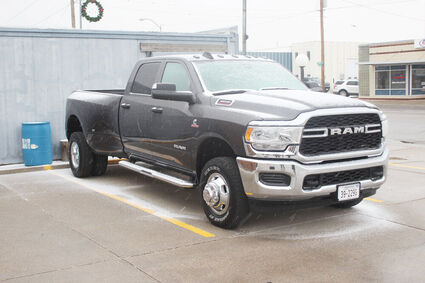 Booe said producing the trailers is an example of how a customer can purchase a trailer and have it modified according to their needs. He added Adams has had very few disruptions in its supply chain delivery.