Lady Raiders Too Much for Alliance 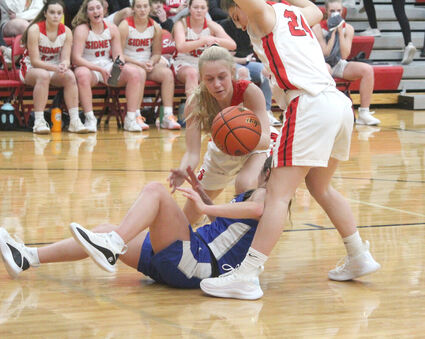 Sidney’s Lady Raider Basketball team has played strong in the early going this season, and Saturday’s matchup with rival Alliance is a good indication of how strong the Lady Raiders will be with their top competition.

Although regrouping from graduating players and slotting in younger players, the Lady Bulldogs are still a quality team that should be able to challenge the Lady Raiders. But that didn’t happen Saturday night, as the Lady Raiders controlled and dominated the game from the opening whistle to the final buzzer.

A strong first quarter gave Sidney a 17-to-8 lead, but the Sidney offense went dormant in the second quarter and allowed Alliance to chip away at their lead. The Sidney defense picked up the slack, but did allow the Alliance girls to shave six points off the lead and go into the intermission only down by three, 21-to-18.

But the Lady Raiders turned it on in the third quarter, moving the ball at will and setting up their shots while overwhelming the Alliance offense with pressure that caused many turnovers, including a stretch of three turnovers in a row right under the Sidney basket that resulted in six quick points for the home squad. Generous substituting and getting young players court time enable Alliance to chip away at the lead a little but in the fourth quarter, but the contest was already settled by then, and the Lady Raiders took the 59-to-43 victory.

It was a special home-court win for Head Coach Tyler Shaw, as the victory marked his 250th as Head Coach of the Sidney Lady Raiders.