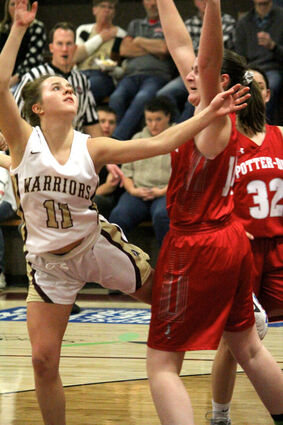 Leyton's Lady Warrior Basketball team got a big win for themselves against the visiting Potter-Dix Lady Coyotes last Tuesday night, giving them two wins early in the season.

The Lady Coyotes have struggled, but Head Coach Shannon Winholtz always has her team ready to play, and Potter-Dix started the game strong.

With a strong defensive set that jammed up the inside for Leyton, the Lady Warriors were forced to take outside shots in the first quarter, and had difficulty finding their range. The Lady Coyotes battled hard under the boards and were able to put in a few easy shots off of rebounds that gave the Lady Coyotes the lead after a defense-heavy first quarter, 8-to-5.

But the Lady Warriors started to find their stroke in the second period and their shots started falling as they were also able to get penetration on the Potter-Dix defense, and the Leyton squad went on a 21-to-0 run. Potter-Dix simply could not hang on to the ball, turning the ball over 30 times in the first half alone.

The Lady Coyotes only scored two points in the second quarter, off of two made free throws in the final seconds of the half.

Leyton continued to score while Potter-Dix struggled for points in the second half, and the Lady Warriors cruised to a 61-to-22 victory.

Freshman Zaili Benish was all over the court, knocking down 22 points and grabbing seven rebounds while playing outstanding defense. Junior Axi Benish and freshman Shawnee Gamble both scored in double digits, with 10 and 12 points respectively.

The rest of the week's action did not fare as well for the Lady Warriors, as they traveled on Thursday to Haxtun Colo., to face off with the Lady Bulldogs, and found themselves in a 14-to-4 hole after the first period.

The Leyton offense continued to struggle while the Lady Bulldogs put up another 22 points in the second period, to give the home team an insurmountable 36-to-9 lead. Haxtun finished off the Lady Warriors in the second half for the 55-to-30 win.

Leyton returned for a battle with Hemingford, and only a strong fourth quarter by the Lady Bobcats let them escape Dalton with a win. The game started slowly on the offensive side, as both teams played tight defense and limited each other's opportunities. Hemingford led 9-to-8 after the first period, then both teams settled in and started to put up points. Each team scored 15 points in the period, giving Hemingford a one point lead at the halftime.

In the third quarter again the defenses dominated with points hard to come by, but the Leyton girls put up nine points against Hemingford's five points to take a three point lead into the fourth period.

But the Hemingford offense took over, and the Lady Warriors could not keep up. Outscored 18-to-8 in the fourth period, Leyton let a win slip through their hands, falling by a final of 47-to-40. Leyton traveled to Arthur County on Tuesday.