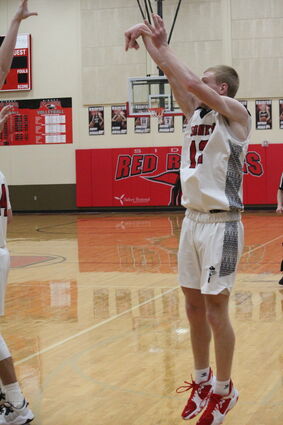 Sidney’s Red Raider Basketball team improved their record to 5-and-1 early in the season with a home win against Alliance Saturday night, 52-to-38.

It was the team’s second meeting of the new year, with Sidney downing a scrappy Alliance team in the Western Conference Tournament. The Bulldogs have had quite a bit of turnover, and with new and inexperienced players it will probably take some time before they settle in and find their roles to be effective. But they do have a lot of energy and fight, and they battled the Red Raiders the whole way Saturday night.

Sidney started well and established the tempo of the game through the first half, but did not run away from the Bulldogs, and ended the first half up by 11 points. The Raiders started the second half with a patient offense that worked for their shots while utilizing pressure on defense to cause turnovers and disrupt the Alliance scoring.

The Raiders continued to play their game and continue to score, with only a few brief runs by Alliance to contend with in the second half, and Sidney never let Alliance back in the game. Even after putting down a three pointer or two, Sidney would fire back with long distance filed goals of their own, keeping their distance from the Alliance team. The Sidney defense stifled Alliance leading scorer Kellen Muhr, holding him to jut 10 points and scoreless in the second half. Sidney finished off the Bulldogs with a 68-to-43 win. Senior Jacob Dowse led the scoring with 19 points and had 11 rebounds on the night. Sophomore Isak Doty was on point from beyond the arc, firing three three-pointers at the end of the first half to give Sidney a double-digit lead while ending the game with 16 points.

Sidney improves to 5-and-1 and hosts the Sidney Holiday Tournament next week.