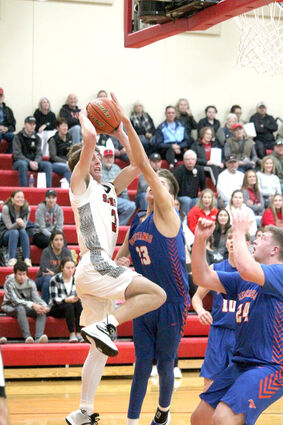 Sidney’s Red Raider boys and girls basketball teams both went 3-and-0 to take championship honors at the Sidney Holiday Tournament Monday through Wednesday last week. Both teams continued their hot start to the 2021-22 season, and both have a record of 9-and-1 going into the New Year.

For Sidney, the Lady Raiders started the tournament on Monday with a matchup with the Burns, Wyo., team. Sidney quickly jumped ahead and built a big lead, with Burns struggling to defeat the Sidney quick passing and ball screens on offense while the Sidney defense smothered the Lady Broncs. This continued into the second quarter with Sidney burying three pointers and dominating under the boards and taking advantage of many Burns’ miscues. Sidney went into the halftime up 41-to-8. Sidney substituted freely in the second half and cruised to a 66-to-28 win.

The Sidney boys started Monday night also against the Burns team, and the Raiders were able to pull away early from the Broncs with their speed and good passing. When the shots started to fall, Sidney opened up a double digit lead going to the half, capped by a Jacob Dowse dunk to give the Raiders a 30-to-17 halftime lead. Again, the Raiders were able to keep the pace and not let the Broncs back into the game in the second half, and took the victory 67-to-49.

In Tuesday’s semi-final rounds, the teams found themselves matched against their counterparts from Ord. The girls game started fast for Sidney, with the Lady Raiders opening an 8-to-0 lead before expanding it to 12-to-4 by capitalizing on six early Ord turnovers, but the Lady Chants finally pulled together and started scoring to tie the game 14-to-14 in the final moments of the first quarter. Sidney scored a last second basket to take a 16-to-14 lead into the second quarter.

Sidney’s shooting went cold through the second quarter and the Lady Chants clawed their way back, tying the game at 20-to-20, but their turnovers prevented them from pulling away from Sidney. The teams battled through the end of the half with Sidney pulling ahead with a three point lead on senior Brynna Ross’ last-second three pointer to make the score 30-to-27. Sidney survived their poor shooting performance in most of the second and parts of the first quarters by capitalizing on Ord’s 20 turnovers in the half. In the third quarter, the Sidney shooting stayed cold, and Ord came back and took a 43-to-42 lead. But the final minutes of the quarter had Sidney roar back with six straight points to go up 49-to-44 at the end of three. Sidney’s offense started to hit again in the fourth, led by three three point hits by Ross, and with Sidney’s strong defensive pressure, the Lady Raiders pulled away to a 67-to-58 win.

The boy’s basketball game between Sidney and Ord also started slowly, and then Sidney scored a string of points at the end of the first quarter to take a 9-to-5 lead. Both teams struggled to score through the second half, with strong defensive play preventing good looks on both sides. Sidney kept pace and went into the half up 17-t-13. Sidney started to gain separation in the third quarter, with better shot selection and passing, and opened a 40-to-24 lead at the end of the the third. Sidney continued to score while holding off Ord, only allowing four points in the fourth, and took the 56-to-28 victory. Sophomore Isak Doty led the Raider scoring with 18 points in the win.

The Lady Raiders started off the championship round early Wednesday afternoon, matching up against Chase County, an athletic team that hustles and has great energy. Sidney had managed a three-point comeback win over the Lady Longhorns earlier in December, so they knew they would have to fight hard for another win. Chase County started fast with four quick points, but then Sidney countered with a 17 point run on their way to a 19-to-6 first period lead, led by senior Emilee Wieser’s 8 points in the quarter. Sidney’s offense went cold in the second period, not scoring for more than five minutes to begin the quarter and allowed Chase County to close the gap, and the teams went into the half with Sidney up 25-to-17.

Sidney shored up their offense and settled in during the third quarter, and opened a double digit lead despite Chase County’s pressure defense and strong play under the boards. Sidney added six points in the last 30 seconds of the quarter to go up 37-to-26. Senior Alecca Campbell started the fourth quarter for Sidney by hitting a three-point shot, and Sidney’s outstanding defense, led by junior Reese Riddle’s outstanding play under the net, held off the Lady Longhorns. Sidney smartly burned the clock, going nearly two minutes at one stretch on offense. Running out of time, the Chase County girls started launching three point shots and pressing, but Sidney kept their composure and finished out the game with 48-to-34 victory. Senior Alecca Campbell led the Sidney scoring with 13 points in the win. In addition to winning the tournament, junior Reese Riddle and senior Alecca Campbell were named to the All Tournament First Team for their outstanding play.

The boy’s team matched up in the evening’s championship game with the undefeated Gordon-Rushville Mustangs, and the game opened with a strong defensive first quarter for both teams, and ended up knotted 10-to-10 at the end of the first period. Sidney went on a nine-point run to start the second period, but then both offenses stalled again against the defenses. The Mustangs strong play under the boards kept them in the game, and Sidney only led by four at the end of the half, 21-to-16. 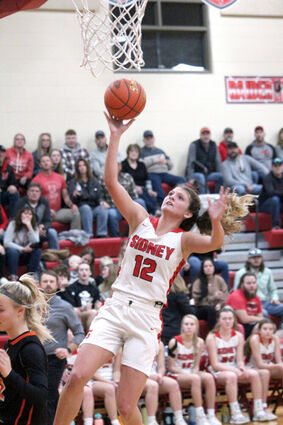 In the second half, it looked like many times Sidney was going to pull away for good against the Mustangs, only to have the visitors go on a run and again narrow the lead. Gordon-Rushville narrowed the lead down to just three points in the third quarter, but the Raiders were able to regroup and pull away. They kept the Mustangs at a distance the rest of the way, and earned the 51-to-45 victory. Sophomore Isak Doty had a great night from the field, nailing seven three point shots to tie a Sidney record, and scoring 25 points in the victory to lead the Red Raiders. Additionally, senior Sawyer Dickman was named Tournament MVP for his outstanding play.

Both Sidney teams are now 9-and-1 and look very strong. The Lady Raiders clockwork-like offense and tenacious defense have propelled them while the boy’s good shooting, height and athleticism is proving too much for competitors. Both Raider teams are back in action on Friday, January 7, as they host the Gering Bulldogs.