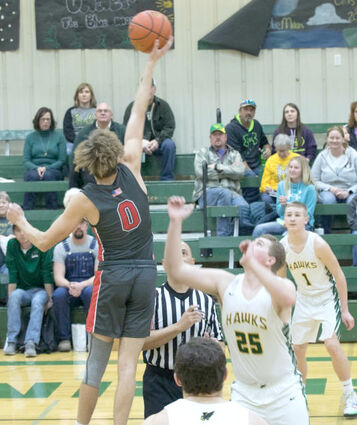 The Potter-Dix Coyotes Boys Basketball team had a busy week with three games, and came out of the stretch with two wins. Their record improves to 9-and-2 as they enter the MAC Tournament this week as the number 1 seed.

On Tuesday, the Coyotes hosted the winless Kimball Longhorns, and the game quickly turned into a rout as the high-powered Potter-Dix offense quickly overwhelmed the visitors. Kimball had difficulty putting up any shots, and those they did were highly contested, frustrating the Longhorn offense. Potter-Dix, however, moved the ball quickly and smartly, finding openings and piling on the points in a 66-to-11 rout. Junior Luke Kasten scored 27 and pulled down 10 rebounds in the win.

On Friday, the Coyotes hosted the Leyton Warriors, a team they rallied against for a fourth quarter comeback win in Dalton back in December. The Warriors started strong and opened a lead early while Potter-Dix fired off three point shots without success. Luke Kasten then hit a three point shot and another two point field goal to pull close and end the first period with Leyton up one, 9-to-8. In the second quarter, it was Leyton's turn to play the long-distance game. Their lack of success form beyond the three point arc let the Coyotes come back after a Potter-Dix run, the Warriors were down 24-to-15 with 3:30 left in the second quarter. Leyton started to trim the lead by getting inside and getting off better shots, and went into the half down five, 30-to-25.

However, the Coyotes had a bad third quarter, missing their shots and letting Leyton get good looks, and only scored nine points in the frame against Leyton's 17 points. Leyton was up 46-to-38 to start the fourth quarter, the second time this year they had a lead against Potter-Dix going into final frame. In their first meeting, the Warriors had a double-digit lead going into the fourth quarter, but they squandered that lead and Potter-Dix stormed back for a three-point last second victory. This time Leyton did not let off the gas, and matched the Coyote's scoring through the period. Potter-Dix tied then took the lead early in the period, but Leyton kept their composure and continued to score. After regaining the lead 56-to-54, Leyton kept up their good defense and made their free throws down the stretch, and Luke Kasten's last gasp three pointer from half court bounced off the back of the rim to give the Leyton squad the three-point 64-to-61 victory. Leyton senior Scout Gamble had five three point hits and led the scoring for Leyton with 18 points, while junior Luke Kasten led Potter-Dix with 26 points.

On Saturday the Coyotes traveled to face off against the Hay Springs Hawks, and a surprisingly close first quarter had the Coyotes up by only one at 13-to-12. The Coyotes found their groove and ramped up their defense in the second period and went into the half ahead 27-to-16. Hay Springs never threatened in the second half, and the Coyotes cruised to a 50-to-38 win.

Leyton and Potter-Dix enter the MAC Tournament this week with both hosting Monday games, with Potter-Dix as the number one seed facing Banner County in Potter, and Leyton as the number two seed playing Creek Valley in Dalton.