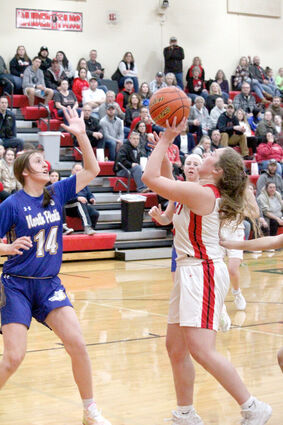 Sidney’s Lady Raider Basketball team got back on the winning track after losing to Oakland Craig last Saturday at the Nebraska Girls Basketball Showcase in Kearney, winning all three games on their schedule this week. Their success lifts their record to 13-and-2 on the season.

The week started with the Lady Raiders hosting a struggling Mitchell Lady Tigers team, and after a slow start by Sidney, the Lady Raiders got their defense settled in and started to hit their shots. They pulled away from the visitors during the first half and kept cruising through the second half for a relatively easy 56-to-45 win.

Friday night was more of a challenge as the Lady Raiders traveled to Ogallala to face off against a tough Lady Indians squad that is much better than their 5-and-8 record suggests. Sidney had tough luck when senior Alecca Campbell, Sidney’s leading scorer, went down with a knee injury early in the game, and was unable to play for the rest of the contest. After the teams battled through a low-scoring first period, Ogallala opened with a 6-to-0 run, but Sidney stormed back with a flurry of their own scoring and went into the halftime up 20-to-19.

The third period had both teams struggling to score for the first four minutes of the frame, then Ogallala went on another run, but Sidney fought back. A three point hit by freshman Kayla Westby tied the game, then Sidney finished the period with an 8-to-0 run to take a six point lead into the fourth quarter. Sidney was able to hold off Ogallala and match their scoring to earn the 61-to-56 win. Senior Brynna Ross scored 16 points in the victory to lead the Lady Raider offense.

On Saturday, the girls returned home to match up with the North Platte Lady Bulldogs, and this time Sidney started fast, opening a 17-to-7 lead at the end of the first period. Playing without senior Alecca Campbell, the Lady Raiders adjusted and played tough defense, giving North Platte very few good looks. Sidney continued to move the ball well on offense and kept up the strong defense, highlighted by a clean block of an attempted layup off a fast break by freshman Kayla Westby halfway through the period. However, later in the period North Platte buried two three pointers in a row while Sidney started to turn the ball over. North Platte’s height and length were causing problems for Sidney’s passing, resulting in steals and overthrows, and the Lady Bulldogs closed the gap to 27-to-23 at halftime.

North Platte narrowed the lead to one point and had the chance to go ahead early in the third period, but too many misfires at the free throw line kept Sidney in the lead.

Sidney continued to struggle with turnovers, as their cross-court passes were getting intercepted or overthrown, and North Platte was able to stay close with the Lady Raiders. Sidney was able to put some distance between the teams when junior Reese Riddle nailed a buzzer-beating three pointer from way beyond the three point line to take the Lady Raiders into the fourth quarter up 46-to-38. However, the Lady Bulldogs roared back, pushing Sidney around under the boards and putting up points on second and third chance shots, tying the game then going up by one with 2:45 remaining in the contest. Sidney bore down and kept their heads, scoring effectively and sinking their free throws during the end stretch.

They recaptured the lead and pulled away, aided by North Platte’s cold shooting in the final minutes, and came away with a 61-to-56 victory. Riddle led the scoring with 19 points and was 7-of-8 from the free throw line, followed by junior Gabrielle Fortner with 18. Sidney moves to 13-and-2 on the season and next hosts Gothenburg on Friday.