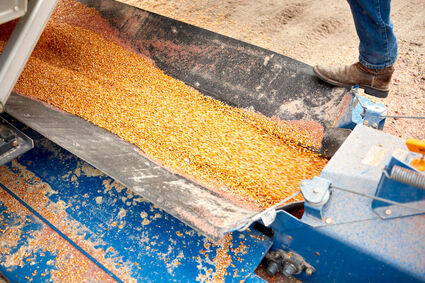 Every time a farmer sidesteps grain-bin entry safety guidelines, they’re rehearsing for a tragedy. With the size of modern bins, the risk of grain entrapment, the leading cause of grain bin related fatalities, has increased over the past 10 years.

Identifying grain handling safety principles is one of the aims of Central States Center for Agricultural Safety and Health (CS-CASH). This University of Nebraska Medical Center group (https://www.unmc.edu/publichealth/feedyard/) is conducting two research projects (funded by National Institutes of Occupational Safety and Health) that are designed to make a positive impact on the sustainability of cattle feedyards through increased safety and health efforts.

Bob Aherin, Ph.D. and Professor Emeritus, University of Illinois Agricultural Safety and Health Program and AgrAbility Unlimited Program, says escaping the consequences of ignoring safety practices results in what can be a deadly false sense of security.

“Most of the time, the reason people enter a bin is to break up clumps of grain that’s out of condition or to repair equipment,” Aherin says. “It’s a common problem.”

Victims may be engulfed or entrapped in grain when grain is flowing, when a bridging or horizontal crust collapses, or when a vertical crust on the sides of the bin collapse, causing a grain avalanche. Even a few feet of grain can entrap or bury someone inside a bin.

Inside the bin, grain flow forms an inverted cone shape. If a farmer walks around the outside of the bin to break up clumps, they may lose their footing and slide right down into the flow of the grain. A large clump of grain may also give way, taking the farmer or employee with it down to the center of the grain flow.

“Sometimes a farmer loses their grip on a shovel or rod and they attempt to retrieve it,” Aherin says. “For a $30 shovel they’re now risking their life.”

“With that pressure going against your body, you can’t step out of that grain even if someone grabs you and tries to help you,” Aherin says. “Within 12 to 20 seconds, you will be fully immersed in the grain. That doesn’t leave enough time for the person standing by to shut the auger down. If there is no one observing, you’re going to be trapped for an undetermined amount of time.”

Often, the entrapped person instinctively screams, allowing grain to get into their throat and block their airway. Now the intense pressure, at least 700 to 800 pounds, is pushing against every part of their body, including their chest, making it nearly impossible to breathe.

“Only a very small percentage of grain entrapment victims survive,” Aherin says. “Even when help does come, it will take several hours for rescue teams to set up the necessary equipment, prepare to cut open the side of the bin, and extricate the trapped person. On average, it takes between four and six hours to complete a rescue.”

If someone is buried in grain inside a bin, rescue workers face significant challenges to safely extricate them without causing additional grain flow, which could completely bury the victim. It’s not uncommon for a victim to succumb to other factors related to the entrapment before they can be removed from the bin.

“During warm weather, temperatures inside a grain bin can reach 120 degrees,” Aherin says. “Some victims, even though the grain is up to their chest, will die from the combination of pressure against their body and the heat in that environment.”

Grain bin manufacturers provide guidelines for entering a grain bin, including never entering a bin unless you’re wearing a safety harness that features a strong, quality safety rope or lanyard that’s tied off overhead. That rope should never have more than a couple feet of slack, to prevent the worker from sinking no more than waist-deep into the grain.

In addition to engulfment, grain bin storage hazards include falls from ladders, entanglement in augers, PTO shafts, gears, and machinery can occur. Controls need to be locked out and tagged to prevent someone from activating the unloading augers while a worker is in a bin. Electrocution can be primarily prevented by avoiding contact with overhead power lines located around the bin while moving portable grain augers.

Anytime grain is stored, there is a risk of exposure to toxic dust, grain fumigants, and noise-induced hearing from the sounds of equipment. Dust explosions are a grain storage hazard, as well as suffocation from hazardous atmospheres inside the bin.

To safely work on the outside of a grain bin, use a fall-restrain or fall-arrest system to reduce or eliminate injury or death from falling off the bin. Workers could slip on a surface, lose their balance while working at a height, or fall from the top or side of the bin for various reasons. Steps on the outside of a grain bin should always feature a sturdy well-maintained handrail. The risk for slipping on steel steps can be reduced through the use of non-slip traction products, appropriate footwear, and keeping steps as free as possible from moisture, ice, or snow.

Lockout/tagout procedures include shutting off all energy sources and locking out the controls of all energy sources. Try the power sources to ensure they’re off before a worker enters the bin or works on any mechanical component. The worker entering the bin should carry the key so power is not accidentally restored while they’re in the bin.

Be aware of all pinch points, wrap points, pull-in points, and shear/cutting points on equipment. Maintain guards on all exposed moving parts.

The 2020 Summary of U.S. Agricultural Confined Space-Related Injuries and Fatalities noted that grain entrapments accounted for 55% or 35 of the 64 agricultural confined space related cases reported in 2020. The other cases involved falls, entanglements in machine components, and asphyxiation due to deficient oxygen or toxic environments.

“Don’t fall into false thinking or reinforce risky behavior,” Aherin adds. “The risk of severe injury and fatality are real. Never omit these industry safety standards. The most valuable resource on any farm is those who work and there.”