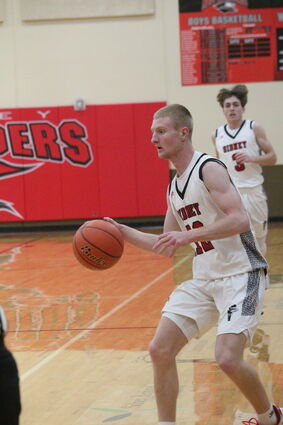 After a hot start to the season, Sidney's Red Raider Boy's Basketball team has dropped three games in a row, with two losses last week against Gothenburg and Yuma.

The Swedes came into Friday's match against Sidney at 6-and-8, but have a talented team with great length and rebounding ability, and matched up well against the Raiders. Sidney was able to stay with the Swedes in the first period, ending the quarter down 13-to-7, but then turned up the defensive pressure and ended the first half tied at 17-to-17.

The defenses again dominated in the the third quarter, with Gothenburg scoring just seven points against Sidney's four. Sidney struggled on offense with turnovers, as the height and long arms of the Swedes intercepted passes and forced overthrows by the Red Raiders.

Sidney was getting out-rebounded throughout the game and forced too many three point attempts, but were still able to lead the game 38-to-36 with less than two minutes left. However the Swedes kept battling and tied the game at 39-to-39 with 35 seconds left. Sidney went on offense and missed a three point attempt, and Gothenburg followed up with a field goal and foul, and the three point play moved the score to 49-to-39.

With the clock running out, Sidney had one last chance, but junior Micah Schneider's three point try missed, and after getting the rebound back, his second try at the buzzer also missed, and the Swedes took the 42-to-39 victory. Senior Wyatt Heckenlively led the scoring with 9 points in the loss.

The Raiders next host Chadron on Friday at Sidney High School.