Warriors Fall To Bayard in Semifinals 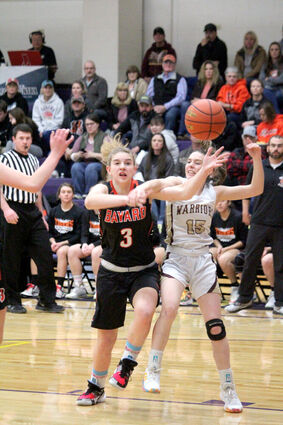 Leyton's Warrior Boy's Basketball team entered the MAC Tournament on January 17 as the number two seed after knocking off number one seed Potter-Dix on the road six days previously.

The Warriors started the tournament against number seven seed Creek Valley and had no trouble against the Storm, building a 47-to-9 lead at the half on their way to a 67-to-20 victory. Four Warriors ended the game scoring in double digits led by junior Justin Ernest with 19 points, followed by junior Dillon Juelfs with 14 points, junior Jason Jensen with 12 points and senior Kole Bush with 11 points in the victory.

Next in the semi-finals at Bridgeport High School, the Warriors faced off against Bayard, and built an 11 point lead at 22-to-11 at the end of the first period and went into the halftime break up 35-to-23.

Leyton led by 19 at around the halfway mark of the second period, but Bayard's offense started to get their shots to fall and trimmed down the lead to 12. Bayard started the third quarter hot, hitting their shots and scoring on fast breaks while the Leyton offense fizzled. Bayard was able to cause turnovers and outscored the Warriors 19-to-6 and by the end of the quarter, the Tigers had taken a 42-to-41 lead.

The Warriors could not come back from the offensive burst of Bayard, and were beaten under the boards and continued to turn the ball over. As Bayard built on their lead, Leyton started firing off three point attempts to no avail as the time wound down, and fell by seven points, 50-to-43. Justin Ernest led the Warriors with 13 points in the loss. Leyton played in the consolation round on Saturday against Garden County, and opened strong with a 19-to-12 lead at the end of the first period. The defenses stiffened for both teams in the second period, and the Warriors went into the half up 25-to-14. A solid third quarter for Leyton added four more points to the lead, and the Warriors closed out the game by holding off Garden County in the fourth quarter, and the 54-to-37 win earned the Warriors a third place showing in the MAC Tournament. Dillon Juelfs led the scoring with 13 points and junior Cort Rummell added 12 points in the win.

For the Lady Warriors, they started on January 18 as the number three seed and matched up with number six seed Minatare. The Lady Warriors breezed past the Lady Indians, opening a 35-to-5 lead at the half on their way to a 60-to-17 win. Freshman Zaili Benish scored 24 points and sophomore Claire Watchorn added 12 points in the victory. 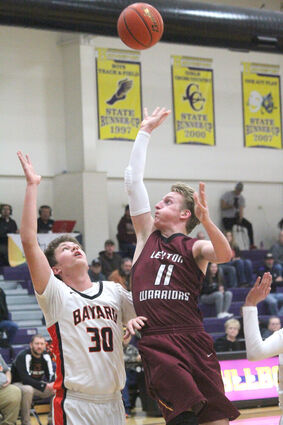 Next up, the Lady Warriors faced Bayard in the semi-finals at Bridgeport High School, and quickly found themselves over-matched, going down 21-to-6 at the end of the first period. Leyton made some adjustments and played better defense in the second quarter, but were still down 29-to-15 at the half. The Lady Warriors could not get their offense going in the second half, and Bayard pulled away for a 63-to-31 victory.

The Lady Warriors then played in the consolation game on Saturday against Garden County, and took a 12-to-8 lead at the end of the first period. They continued their good play in the second quarter and led 27-to-13 at the half. Garden County had a strong third quarter, but it was not nearly enough to overcome the deficit, and Leyton finished the game with a 49-to-31 victory, and earned third place in the MAC Tournament.

The Warrior teams were scheduled to next host Banner County on Tuesday at Dalton.