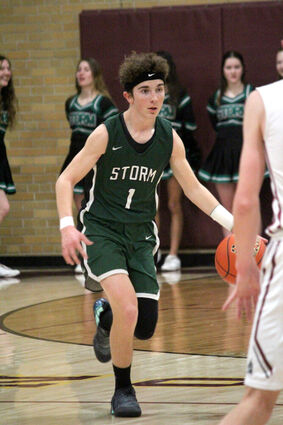 Creek Valley’s Storm Basketball teams each dropped two contests over the past week, moving their record to 2-and-16 for the girls, and 1-and-17 for the boys on the season.

On Thursday, Creek Valley hosted the Potter-Dix and the night started with the girls’ game. Potter-Dix was able to open a lead and hold off the Lady Storm, with both teams playing strong defense. The Lady Coyotes were able to get more shot opportunities, and took advantage as they pulled away later in the game. Creek Valley fell by a final score of 52-to-43, with freshman Karsyn Burgman leading the scoring for Creek Valley with 12 points.

On Friday, the Storm teams traveled to Leyton, and the girls could not keep up with the fast-paced Lady Warrior offense and fell behind 48-to-24 at the half. Creek Valley double teamed Leyton leading scorer Zaili Benish for the entire game, but her teammates picked up the slack and continued to score, giving Leyton the 79-to-39 victory. Burgman again led the scoring for Creek Valley with 14 points in the loss.

For the boys it was a Friday-Saturday away schedule, with the first game coming against Leyton on Friday. Leyton’s fast-paced offensive attack proved too much for the Storm to handle, and they fell behind quickly. Down 44-to-10 at the half, the Storm could only muster 11 points in the second half, and fell by a final score of 65-to-21.

On Saturday, the Storm traveled to Peetz for a match up with the Bulldogs, and after a relatively tight first period, the the Storm fell behind 29-to-19 at the half.

Creek Valley was able to outscore Peetz 17-to-15 in the second half, but it was not enough to overcome the deficit, and fell by a final score of 44-to-36. Senior Eli Schmid led the scoring with 10 points in the loss.

The Storm teams were scheduled to host Perkins County on Tuesday.