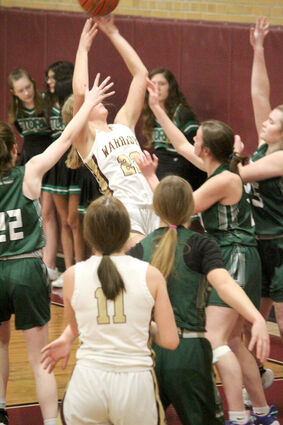 Leyton's Lady Warrior Basketball team had three games over the past week, and dropped two of the contests while racking up a big win against Creek Valley. On Tuesday Feb. 1, the Lady Warriors travelled to Colorado to match up with the Sedgwick County Lady Cougars. Sedwick County's high-powered offense built a big lead in the first half, and went into the intermission up 35-to-18. Leyton tried to fight back, but the Lady Cougars' defense was too tough, limiting shot opportunities and creating turnovers. The Lady Warriors never threatened the Sedgwick lead, and fell by a final score of 60-to-33.

Next, the Lady Warriors hosted a struggling Creek Valley team on Friday, and went to work early, putting up 29 points in the first period on their way to a 48-to-24 halftime lead. The Lady Storm double-covered Leyton scoring leader Zaili Benish the entire game, limiting her to just six points. However, the rest of the Leyton squad more than made up for Benish's lack of scoring, and had no trouble finishing off the Lady Storm by a final score of 79-to-39. After the game, Leyton Head Coach Jed Benish said, “I was surprised they doubled Zaili (Benish) for the entire game, but it gave the other girls an opportunity to score. I think it's a good thing to get their confidence going as sometimes the team relies on Zaili a little too much to score.”

On Saturday the girls traveled to match up against the Hyannis Lady Longhorns, and it was a tight battle between the teams all game long. The Hyannis defense did a great job slowing down the Leyton scoring and kept the Lady Longhorns in the game. The home team was able to edge the Lady Warriors at the end of the contest, pulling out a 54-to-52 win. Leyton's record moves to 10-and-8 after the week's action, and they were scheduled to host Bayard on Tuesday.