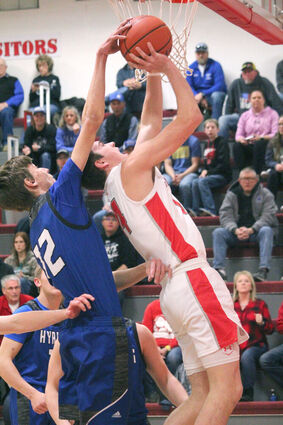 Potter-Dix's Coyote Boys Basketball team has had very few bumps in the road during this season, but hit one on Friday night when they hosted the 19-and-1 Hyannis Longhorns in Potter. In one of the strangest starts to a game for two high-scoring teams, the defenses shut down any scoring by the teams, with just one lone point via free throw on the board for Potter-Dix until Hyannis scored a filed goal with 3:35 left in the first period to move the score to 2-to-1. A relative flurry of scoring happened in final three minutes of the half, and the Coyotes were up 8-to-7 at the end of the first period.

The game seemed to flow off of the defenses, with both teams struggling to get good looks and battle for points under the boards. Hyannis big-men Liam Kostman and Rylee Anderson made their presence felt in the paint, stifling the Coyotes' offense at times and making each basket come at a price. The teams kept it close though the contest, with neither team gaining much advantage. The contest came down to a battle in the fourth quarter, with each team matching the other in scoring. Hyannis was able to pull ahead, but Potter-Dix kept fighting. However, the visitors were able to hang on, and their two-point advantage held up, sending the Coyotes down to a 48-to-46 defeat. It's only the third loss of the season for Potter-Dix, who fell to 15-and-3 on the year.

The Coyotes bounced back on Saturday with a trip to face off with the Arthur county Wolves. This game was more like the Coyotes' usual contests, starting with a big lead by Potter-Dix, and continuing to score freely through the second half. Potter-Dix had no trouble defeating the Wolves by a final of 67-to-22, moving their record to 16-and-3.