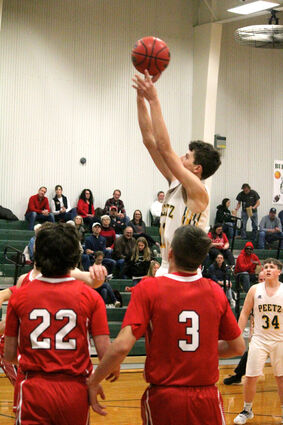 Peetz’s Bulldog Basketball team hosted the Otis Bulldogs on Thursday looking to avenge an opening day loss against their rivals. The game started with both defenses giving the opposing offenses trouble, and Peetz fell behind 11-to-6 at the end of the first quarter. Peetz battled hard in the second quarter, staying with the visitors and going into the half trailing 25-to-18.

The offensive adjustments Peetz made at the half worked well, and the home Bulldogs ripped off a 21 point third quarter that put them in control of the game. The teams battled through the fourth quarter, matching each others’ scores, but the big Peetz third quarter was too much for Otis to overcome, and the home Bulldogs took the victory 57-to-50.

Peetz did a great job at the foul line in the fourth quarter to keep Otis from rallying back. The win moves Peetz to 5-and-11 on the season, and they were scheduled to travel to play Fleming on Tuesday.