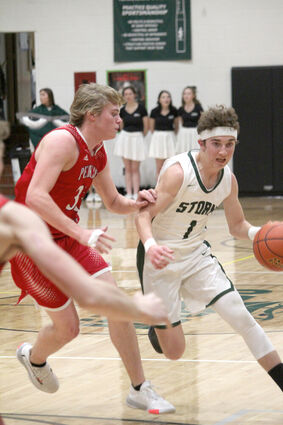 Creek Valley's Storm Basketball team continued their struggle of a season with two more losses over the past week.

The third quarter again featured red-hot shooting by the visitors, and 20 more points in the quarter put the game away. The teams cruised through the fourth quarter, and Perkins

On Friday, the Storm hosted the south Platte Blue Knights, and both teams started well. With good defense by both sides, the offenses scored when they could and the game was knotted at 13-to-13 after the first period. The good play continued through the second period, but South Platte was able to gain an advantage, and took a 27-to-24 lead into the halftime intermission.

However, it was a big third quarter by South Platte that turned the game, as the Blue Knights scored 20 points in the third period while limiting the Storm to just 11 points. With a 14 point cushion, South Platte matched the Storm's scoring and were able to take the 59-to-47 victory.

Creek Valley faces Wallace on Friday at home, then gears up for Subdistrict Tournament play next week.