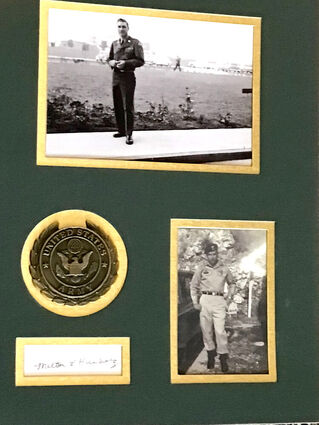 Milt Hunholtz had graduated from Diggins, Missouri High School in 1951. Fairly soon there after, he went by car to California where he would work as a telephone lineman. While there, he heard from the Draft Board in Diggins, MO. They gave him a “heads up” that it was more than likely he was going to be drafted into one of the Branches of military service. There was a lot going on in the world at the time. He may soon be a part of it… Milt headed back to Missouri.

Draft officials said he had two or three months before his induction. He picked up a job at the General Motors assembly plant in north Kansas City, Kansas. Actually, he was there just long enough to have a little seniority but then, the Army had his number.

Milt headed to Fort Leonard Wood, Missouri on a steam engine train. On arrival, he and others were directed to a suburb of the main post called Camp Crowder, where military clothing was issued and fitted, as it were, and some chow and most likely, a good Army haircut. He remembered a man of size and authority approached him and asked him what the man’s name was? “Carter”… get down for 20 trainee! It’s SERGEANT CARTER!”

He said he was treated well. He and others had to learn about following orders, how to live with about 50 other men, how to make their beds, where they were to eat, etc. The chow hall, and the other buildings at the time, were off the ground, on shorter wood supports. Wild boars roamed the area under the buildings and found their way to where food was – especially the garbage. In time, that part became just a distraction. The unit of men and the Army had a schedule to keep so there was little to no lounging about in the chow hall.

Milt recalled that he was qualified as an expert with the rifle and the carbine. He liked shooting the 50 caliber machine gun. Milt said that the shooting at the time was the reason he was wearing hearing aids now. He got along well in the Drill and Ceremonies. Any training away from the barracks was arrived at by means of leather personnel carriers. The return trip, same carriers. There was plenty of physical fitness, first aid, map reading and other subjects of instruction.

About eight weeks later, he and the men in his platoon marched across the parade grounds “standing tall, looking good… oughta be in Hollywood”. They graduated.

Milt had received orders to report to Camp Polk, LA. He was in a training mode so he could learn about artillery. The course of instruction was enough for him to be familiar with the workings of it. After a period of time, the men were assigned to various units and told they were going to Germany.

The means of travel was on a US Navy ship functioning as a troop carrier. The trip lasted eleven days. There were around a thousand soldiers traveling as well as the ships’ crew. Milt tried his best to get the top bunk as the bunks were five-high. Sea sick soldiers ALL. In the galley, the tables the men placed their food trays on had bumpers. That way if the tray slid, it wouldn’t go so far. While enroute, the best place to be was on the ship’s deck. When Milt and others disembarked from the ship, walking was a challenge for a couple of days.

When finally in the area of Freiberg, Germany, Milt was told he was in the 39th Field Artillery Battalion of the 4th Infantry Division. His specific duty was to be a “Fire Direction Control” soldier. The unit patch was an off-white rectangular one that had green clovers in each of the four corners.

The barracks was an old building that had been very well maintained. The chow hall was in the same building… “perfect”. The work was field artillery. The men trained continuously on exercises of supplying amunitions for, timing and target acquisition. It was important work. A small piece of equipment had to be established as Fire Direction Control (FDC). Here, soldiers had all the maps needed for the area of Grafenwohr, Germany. The soldiers assigned to FDC told the artillery personnel where to aim their cannons, at what elevation and which munitions to use. Once the round was fired and it hit the area of the target, the responding data would be relayed to the FDC for adjustments as needed. Milt was one of the soldiers in the FDC.

Milt really liked the Germany landscape and history. He found the people he came in contact with to be just to his liking as well. And… one in particular that he married in Germany!

In time, his military commitment – time of service of six years - was coming to an end. Milt out-processed at Fort Dix, New Jersey. He had obtained a good rank of a Sergeant and was honorably discharged. With separation pay and other incidental pay, he and his new wife could go on to Missouri, where they would start a new life. After about four years of working at two or three different career paths, Milt began thinking the military life was pretty good.

He went to a recruiter and “re-upped” for three years. He had to drop a rank in grade and was directed to go back through Basic Combat Training at Fort Leonard Wood, Missouri. Since he was a prior service soldier, the training company considered him “good help.” He was issued a distinctive helmet liner and marched the trainees around the Company area, and was, in general, a “hey you.”

In his opportunity to re-enlist, Milt wanted to be, and signed up for the Special Forces of the US Army. After graduation, again, Milt was assigned to a Special Forces unit that used Okinawa as a base of operations. He and others flew the usual hopping flights that went to Hawaii, Guam and on to Okinawa.

In 1961, the mission of this and other Special Forces units was to act as advisors to US–friendly soldiers in Vietnam. Teams of 12 Officers and NCOs would rotate into and out of Vietnam on a 6 month plan. Milt was assigned to be the NCO in charge of logistics for the actions. His work entailed accountability for all equipment, weapons, and munitions. He was the unit armorer, and an instructor as needed. His assignment was to order and get all the things the teams needed in the field. Milt had gone through jump school. To maintain this special status, the paratroopers were required to jump from a perfectly good airplane once a month. Milt was fortunate that his wife was able to accompany him during this piece of service. He served most of his last two years as a Staff Sergeant in Okinawa.

Milt was injured on one of the training jumps. His right hip will still remind him of his service. He also was hearing-disabled from weapons training. Although he has requested assistance for his sore hip, his records can’t be found to verify that he was injured. Due to a huge fire at the National Records Center in St. Louis, MO, his records couldn’t be found. Many of those records have been re-constructed, however.

The three years of his second tour of duty came to an end. It was time to head back to the “States”, where he and his wife would re-settle, start a family and go on with their lives.

Milt earned the National Defense Service Medal, the Good Conduct Medal, the Army of Occupation Ribbon, and the Expert badges for rifle and pistol shooting. Milt said the military service was good for him. He had traveled nearly around the world, studied and learned two different occupational specialties and could apply his training in jobs in the civilian world.

Staff Sergeant Milt Hunholz, you’re a good soldier! Thank you for your service!