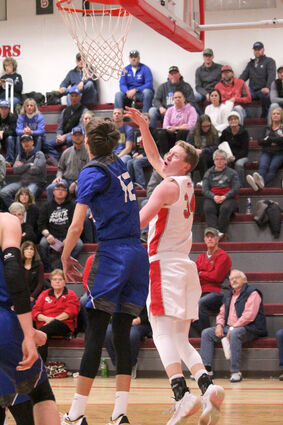 Potter-Dix's Coyote Basketball team finished their regular season with two more wins, and earned the number one seed for this week's Subdistrict Tournament. On Friday, Potter-Dix earned a win by forfeit against a Minatare team lacking numbers due to illness. On Saturday, Potter-Dix hosted the Perkins County Plainsmen for their final regular season game, and the stands were filled with red, white and blue and American flags on “USA Day”.

Potter-Dix started fast and built a lead, but by the second quarter Perkins County had found a scoring groove and trimmed the Coyote lead. Potter-Dix continued to score, but Perkins County hung tough and did not let the Coyotes get too far ahead. The teams continued their play thorugh the third quarter, and in the fourth Perkins County had caught up and took a lead for a breif time. However, the Coyotes were able to shore up their defense and put down points when they needed them, and pulled away in the final minutes for a 58-to-49 win. Senior Thomas Muldoon led the scoring for Potter-Dix with 18 points.

The victory ends their regular season with a record of 18-and-3 and Coach Michelman and his team will be hosting the D2-11 Subdistricts. Potter-Dix will play the winner of Creek Valley vs. Banner County on Tuesday.