Mullen Too Much For Potter-Dix 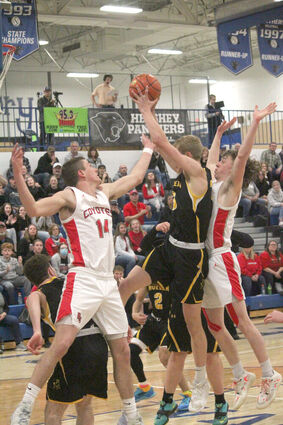 Potter-Dix's Coyote Basketball team ended their season on Tuesday, March 1, with a loss to the Mullen Broncos in the D2-8 District Final at Hershey High School. Potter-Dix ends their outstanding season with a 20-and-4 record.

The Mullen Broncos came into the District Final with a 17-and-8 record and number 9 seed, led by sharp-shooting 6' 4” Forward Clayton Moore averaging nearly 20 points per game. Both the Broncos and the number 8 seed Coyotes started the game trying to push the ball up the court and grab an early lead, but both offenses sputtered for the first two minutes of the game, missing long shots and misfiring on easy layups. After two minutes went by in the first quarter, Mullen got on the board with a three point hit, then continued to score while Potter-Dix scrambled to defend. Mullen opened with a 13-to-0 run while Potter-Dix's shots kept missing. With about two minutes left, Potter-Dix junior Zach Rotert finally got the Coyotes on the scoreboard by sinking a short field goal, and then Mullen added another three points to take a 16-to-2 lead into the second quarter.

Mullen's Moore was causing problems for the Potter-Dix defense with his slick ball-handling and passing skills, finding open players and feeding them for easy buckets under the net. Mullen was playing faster and getting better looks, while Potter-Dix had trouble finding gaps in the defense and holding on to the ball. When the Coyotes did get an open look, the ball wouldn't fall through the hoop, and they fell behind further. Mullen opened a 29-to-8 lead at the half.

Despite the sharp play of the Broncos, it was simply Potter-Dix's inability to score, especially in the first half, that determined the outcome of the game. The Coyotes came out strong in the third quarter and hit some shots in the first few minutes, but then went cold again and allowed Mullen to again expand their lead. The Coyotes were doing a good job on defense and started to again chip away at the lead. Potter-Dix senior Jared Anton buried a three point shot in the final minutes of the quarter to move the score to 36-to-20 only to have Mullen's Moore respond with a three point hit of his own. The Broncos took a 40-to-20 lead going into the fourth period.

Potter-Dix junior Karter Wittrock buried a three-point shot early in the fourth only to see Mullen's Moore again respond with a three-point hit of his own. Potter-Dix kept chipping away, with junior Luke Kasten connecting on a three point shot from way beyond the arc, followed by a two point hit then another three-pointer from well beyond the arc. After the second three pointer, Mullen called a timeout with 4:21 left, and 45-to-33 lead. After the timeout, Mullen started to use senior guard Trevor Kuncl to burn away the clock. The senior's excellent speed and ball-handling had the Potter-Dix defenders chasing him around the court, unable to steal the ball. Kuncl was finally fouled, and made Potter-Dix pay by sinking both his free throws, as they were in the double-bonus. Potter-Dix then got the ball back and scored, only to have Kuncl, Moore and sophomore Kyle Finney again burn the clock and scramble the Potter-Dix defense. Mullen kept hitting their free-throws, and the Coyotes ran out of time, falling by a final score of 52-to-37. Although Potter-Dix outscored Mullen 29-to-23 in the second half, it wasn't enough to overcome the 21 point advantage the Broncos built in the first half.

Potter-Dix had to settle for a runner-up showing, but it was still a very successful season for the Coyotes. There were many highlights, including winning the MAC Championship for the second year in a row. 20 wins in a season was the most for Potter-Dix since 1988-89 (21). Two school records were broken, fewest points allowed in a game, 11 vs. Kimball and fewest average points allowed per game, 35.7. Coyote team leaders for the major statistical categories were junior Luke Kasten, 20.0 points/game, 480 total, 10.7 rebounds per game, 245 total, and 2.9 steals/ game, 67 total. Senior Thomas Muldoon led the team with 4.5 assists/game, 103 total and junior Zach Rotert averaged 1.6 blocked shots/game, 37 total.

Although the Coyotes will lose Muldoon, Jared Anton and Niko Koon to graduation, they return six players with starting varsity experience, and should be very competitive next year. Look for another MAC Championship, a district championship, and a return to the State Tournament next year if the Coyotes can keep up their high level of play.