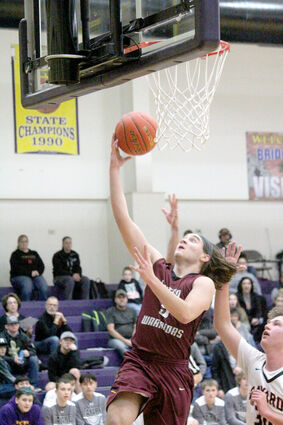 Leyton's Warrior Boys Basketball team blazed through their regular season schedule with an 18-and-4 record, a D1-12 Subdistrict Championship and a District Final appearance. However, the season came to a halt on Tuesday at Cozad High School when the Warriors' season was ended by the tough defense of the Mead Raiders.

Leyton came into the D1-8 District Finals as the number 8 seed, and matched up against the 15-and-10 number 9 seed Mead Raiders. The game was played at a neutral site, and both teams had to travel quite a distance to get to Cozad High School for the game.

Mead was able to open an early lead in the game, hitting field goals and playing good defense. The Raiders built a 7 point lead over the Warriors at the end of the first period, 16-to-9.

The pace continued through the second quarter as Leyton began to beat the Mead defense and score. Leyton was able to put up 12 points in the second quarter against Mead's 14, and trailed 30-to-21 at the halftime intermission. Leyton had adjusted to Mead's speed and defensive pressure, and were still within striking distance going into the second half.

However, Mead opened fast in the third quarter and ramped up their defense, putting up scores while forcing bad shots by Leyton. Mead had been considered a strong defensive team, and showed it in the second half.

The Raiders applied such effective pressure that even when Leyton got a good look, the ball just wouldn't fall through the net. Mead put up another 13 points in the quarter, but Leyton's 5 point third quarter pretty much ended any chance of a Leyton comeback.

This continued into the fourth quarter where Leyton's chances of a comeback faded with the lack of scoring by the Warrior offense. Mead put up another 13 points in the fourth quarter, but Leyton could only manage 7, and went down in defeat by a final score of 56-to-33.

Leyton ends their season with an 18-and-5 record and earned runner-up honors in the District Finals. It was a tremendous turnaround from last season's 8-and-11 mark, sparked by the emergence of junior Dillon Juelfs and his team-leading 14.5 points per game.

Solid play by seniors KJ Bush, Scout Gamble and Jason Jensen led the team to their most wins in recent memory. Mead was led by junior A.J. Carritt with 18 points, while Juelfs led Leyton with 11 points in the loss. After the game, Leyton

Head Coach Chris Morgan said, “It was a tough loss for the boys as we had set our sights on getting to the state tournament. We will continue to work hard over the summer and hopefully get a chance next year to get back to Lincoln.”