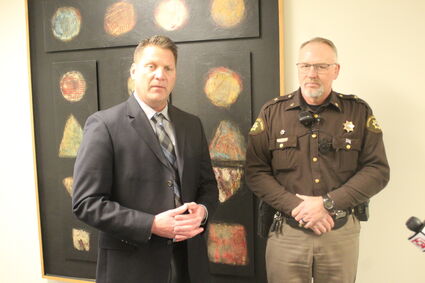 Methamphetamine is defined as the significant threat to the state of Nebraska. It has caught the attention of law enforcement and drug counselors to the point a campaign has been launched: “It's a matter of life or meth.”

“Meth is a major threat across the state of Nebraska, Phil Lenz, FBI Assistant Special Agent in Charge, Omaha, said at a meeting at Western Nebraska Community College in Sidney March 8.

“We held our first training in Kearney,” he said.

From Kearney, officials met with law enforcement officials in other communities including Sidney.

Cheyenne County Sheriff Adam Frerichs was among those in attendance. He said the class was a multi-faceted training. The session also allowed the opportunity for local officers to meet with FBI agents whom police and sheriff's officers could be working with. One reason the session was held is to build and strengthen relationships between local law enforcement and federal authorities.

A few years ago, rural Nebraska and Colorado were known for production of meth.

Operations have moved to Mexico, imported to the U.S. cheaper than producing it in American rural areas. Frerichs and Lenz said some of the attraction to rural areas is the smaller number of law enforcement officers and population.

Frerichs said the Midwest appears to be the focus of much of the imported meth.

One question that is almost a moving target is what causes a person to become addicted to meth. Is there a reason, a cause, that leads to addiction and thus meth is a result of something else, Lenz and Frerichs were asked.

“It's a large issue and its hard to pinpoint one reason,” Frerichs said.

According to Rebound Behavior Health, meth use and addition is linked to several reasons:

“Addiction is a disease of the brain that is not considered to be caused by a single factor. Rather, it is believed that addiction to meth and other drugs or alcohol is caused by a variety of environmental triggers, heredity, and physical changes in the brain working together. The most common causes and risk factors associated with meth addiction include:

Genetic: Addiction is often considered a hereditary disease. People who develop addiction to meth or other drugs often have a first-degree relative, such as a parent or sibling, who similarly struggles with addiction. However, many addicts do not have a family history of addiction.

Physical: It’s been suggested that certain people are born with a different structure and functioning of their brain and central nervous system, which can put them at a higher risk for developing an addiction to meth or other drugs.

Environmental: Those who are born into families in which addiction is a part of daily life may come to see drug abuse as the appropriate way to solve problems, and as a result develop an addiction later in life. Additionally, using drugs at an early age increases the risk that an individual will develop an addiction to drugs like meth.

Risk Factors: The more risk factors a person displays, the more likely they are to develop addiction to drugs like meth.

Protective Factors: The more protective factors a person has, the less likely they are to develop addiction to drugs or alcohol.

Personality traits such as self-control

Academic and scholastic compliance and success

Strong attachments to the community.”