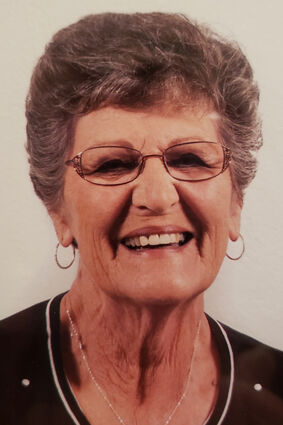 Geraldine “Jeri” L. Trowbridge, age 80, of Sidney, passed away at Sidney Regional Medical Center in Sidney, NE on Saturday, March 12, 2022. Graveside Services will be held at 2:30 P.M. Friday, March 18, 2022, at Greenwood Cemetery in Sidney, NE. Cremation has been held. In lieu of flowers, donations can be made in care of the family for a memorial to be designated at a later date. Friends may stop at the Gehrig-Stitt Chapel on Thursday from 1-6:00 P.M. In lieu of flowers, the family requests donations be made to The Catholic Rummage House, her favorite Friday morning activity.

You may view Jeri’s Book of Memories, leave condolences, photos and stories at http://www.gehrigstittchapel.com.

Jeri was born on April 11, 1941 in Sidney, NE to John Joseph and Frances Evelyn (Siders) Ross. She was the only girl with four older brothers and her twin brother Gerald. She was always known as “sis” and was called “Aunt Sis” by many nieces and nephews.

She grew up in Sidney and attended Sidney Public Schools.

She was united in marriage to Jim Trowbridge on July 5, 1975 in Las Vegas, NV. They made their home in Sidney.

Jeri started working at the age of 15 at the Blue Moon Café and worked as a waitress and at Sears for many years. She became a homemaker and cared for children in her home for a few years. She loved her family dearly, caring for her mother in her later years daily until she entered the nursing home.

Her hobbies were fishing, camping, doing crafts and shopping at the Catholic Rummage House. She could spend all day fishing and then cooking fish for everyone but would never eat them. She was a great cook and enjoyed hosting many family dinners.

Her happiest moments were giving of herself, making people happy and enjoying her children, grandchildren and great-grandchildren.