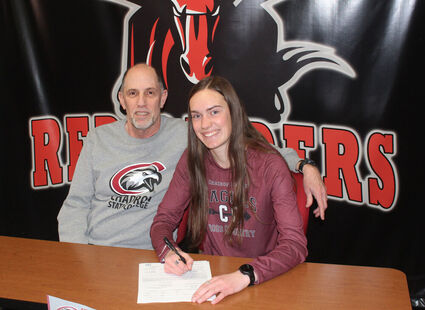 Sidney senior Lydia Peters signs her Letter of Intent with her father Robert to run for the Track and Field team and Cross Country team at Chadron State University. Peters plans on majoring in Biology and plans on becoming a Marine Biologist. Her interest in the field was sparked by a Plant Biology course she took at Sidney High School. She has many friends at Chadron State, and will be coached by former Sidney coach Nicky Banzhaf. Sidney Cross Country coach Donna Wiedeburg said of Peters, “She's incredibly dedicated and coachable. She's going to do great things at Chadron State College.”