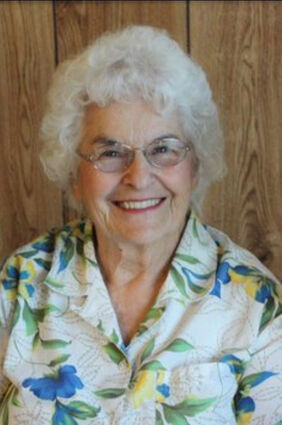 Donna Oliverius, age 92, of Powell, Wyoming, formerly of Sidney, passed away on Saturday, March 19, 2022, with the love of her children and grandchildren around her.

Funeral services were held at 2 PM on Monday, March 28, 2022, at First United Methodist Church in Sidney, NE with Pastor Corey Jenkins officiating. Burial took place in Greenwood Cemetery in Sidney, NE. In lieu of flowers, donations can be made to the American Diabetes Association. Friends were invited to stop at church from 12 Noon until 2:00 PM on Monday.

You may view Donna’s Book of Memories, leave condolences, photos and stories at http://www.gehrigstittchapel.com.

Donna Mae (Allman) Oliverius was born in Sidney, NE on December 1, 1929 to William and Cyrena Allman. She was raised on a farm with her five siblings. She and her siblings had many chores, to help take care of the farm and animals. She walked to her country school, and told of a time her sister Lila and her were avoiding the spiders in the sunflower fields by taking the long way home. Her brother Bill came up on horseback to let them know they were “in trouble by mama” due to taking so long. When she was in high school, she stayed in town with a family as a nanny/caretaker so that she could attend school in Sidney.

Donna married Raymond Oliverius on Oct 9, 1947 when she was 17. They married across the street from the “pink house” Ray would later build that has been a long-standing hallmark in Sidney…..thanks to Ray and the many coats of various shades of pink paint over the years, at Donna’s request. She and Ray built the home together, doing most of the work themselves. It became a cherished home for their family, and the place of priceless memories of their grandchildren and great-grandchildren for years to come.

They had four children. Donna was an excellent wife and mother. She worked hard in the home, making dresses and clothing, baking wedding and elaborate birthday cakes. Her signature tiny piped bluebird was a final special touch to each cake. She also worked at Gambles store for many years when the children were older. She also enjoyed sewing, crocheting, crafts and camping. She wrote wonderful poems, many of which were published in various anthologies and even in the Library of Congress at Yale! She belonged to many clubs and groups, including Eastern Star. Later on she also found a love of square dancing with Ray, coffee dates with many friends, and making homemade cards by the hundreds every year. She loved nature and always noticed the beauty around her. Sunrises, sunsets, fall, chickadees, roses and geraniums were some of her favorite things.

Donna loved babies and children, and had a very special way with them. She always remembered which story was about which child… a difficult task after having 10 grandchildren and 20 great-grandchildren!

Donna liked this quote. “Faith is: Believing in the sun even when it is not shining. Believing in love even when not feeling it. Believing in God when he is silent.” (Author Unknown). She had a strong faith in God and practiced this by living a life of example. She was a lifelong member of the Methodist church, having her first communion at age 12. She was an amazing, funny, loving woman and was loved by all. Fly high with the birds, Donna.